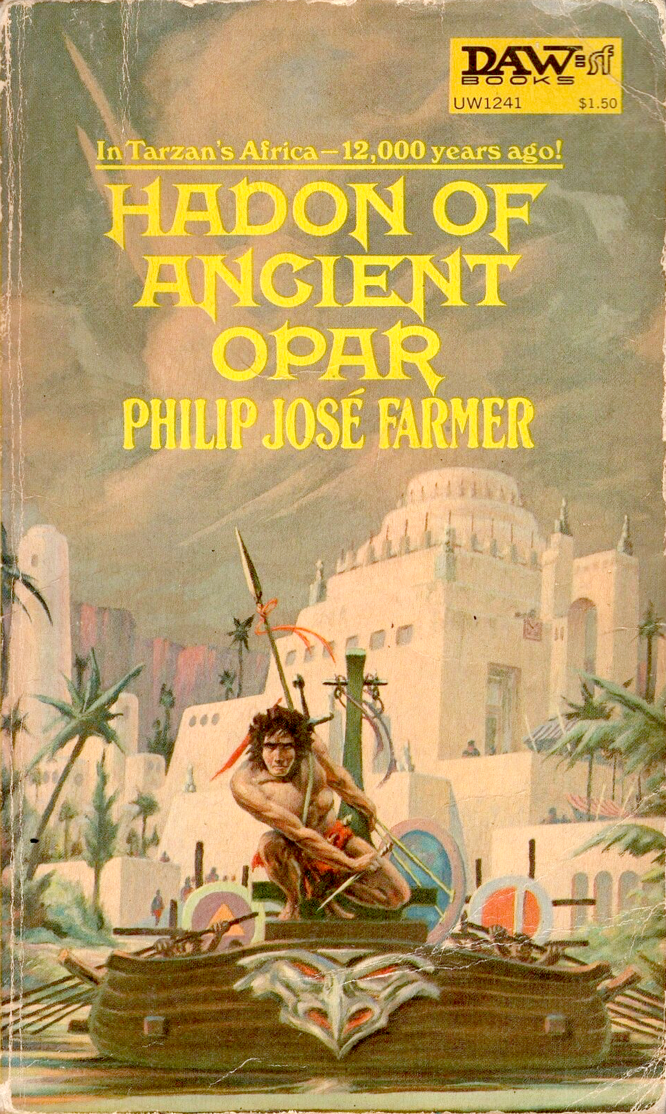 Hadon of Ancient Opar is a “prequel” to the Tarzan books of Edgar Rice Burroughs, if the term can be applied when the respective narratives are separated by a chronology of some twelve millennia! The story is set in and around the empire of Khokarsa, a civilization surrounding the interior seas of prehistoric Africa.

During the events of Hadon, Khokarsa is on the cusp of potential change into a violent partriarchy from a matrifocal culture ruled by priestesses, with the eagle-headed goddess Kho being supplanted by the flaming god Resu. (The story thus bears interesting comparison to Aleister Crowley’s ancient Egyptian fantasy “Across the Gulf.”) Khokarsan religion involves a stunning frequency of blood sacrifice as a matter of routine, and the culture combines a high bronze-age level of technological development with totemistic, quasi-tribal social organization.

The story begins with the youth Hadon going to compete in the great games of Khokarsa that are supposed to produce a suitor for the High Priestess of the empire. (Thus, the winner could become king.) Hadon encounters many obstacles to his ambitions, but remains a virtuous hero throughout the book. He is loyal to the old regime of Kho, and when a partisan of Resu proffers a paraphrase of Exodus 20:5, he characterizes it as “insanity” (159). There is a frank acceptance of sex in Khokarsan culture, but Hadon’s adventures here involve much more violence than sex.

Appendices to the book provide about twenty-five pages of maps and chronology, but they are largely superfluous, and they appear to have been the product of Farmer’s development of the Khokarsan context from the article “Heritage of the Flaming God, an Essay on the History of Opar and Its Relationship to Other Ancient Cultures” by Frank Brueckel and John Harwood in The Burroughs Bulletin. Roy Krenkel’s dozen or so illustrations for Hadon are ink renderings in a loose style, that were probably dynamic and exciting in the originals, but mostly come across as muddy and incoherent in their reproductions here.

The most important observation I can offer to potential readers of this book is that it is not a stand-alone novel. It ends with a cliffhanger, and the sequel Flight to Opar takes up at the very instant that Hadon ends. Farmer repeatedly implies that he is kicking off a long series of books with Hadon, but Flight was the only other Khokarsa/Opar book to be published during his lifetime. It appears that Christopher Paul Carey has subsequently brought further materials into print, posthumously developed from Farmer’s MSS.