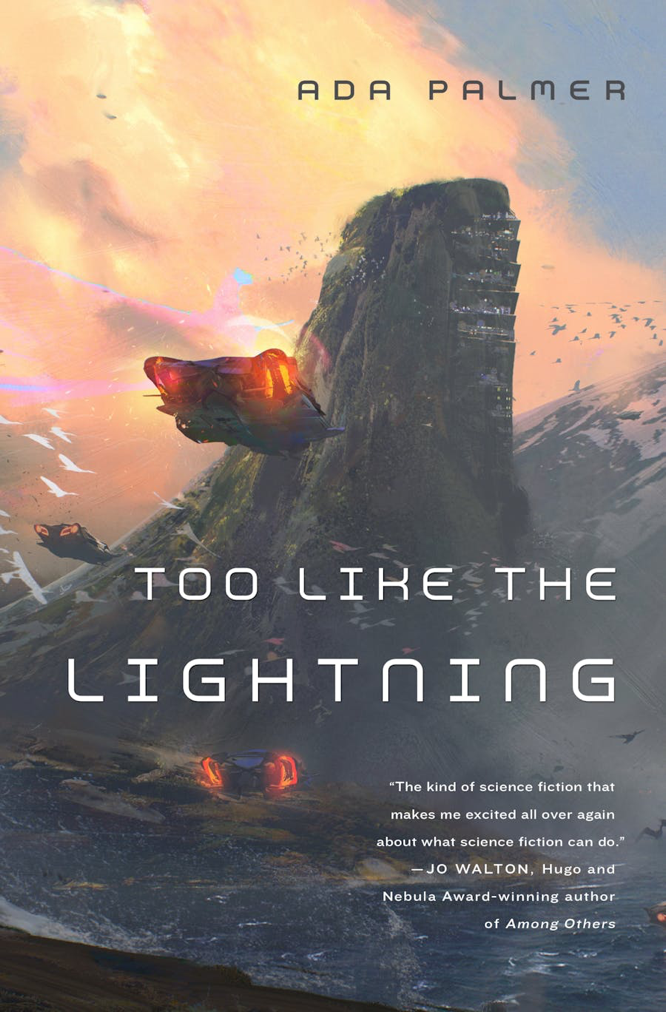 To begin at the end: this book is far from a standalone novel, and I would only recommend it to those with a reasonable expectation of continuing to the later numbers of the Terra Ignota tetralogy. It opens a variety of plots and questions, but it supplies very little closure. Mostly, this volume accomplishes the presentation of a future world society and the definition of key characters within it.

The setting is a 25th century that I found a little improbably optimistic in terms of the perpetuation of our contemporary civilization, although there are increasingly explicit references to upheavals that have happened in the interim. The questionably reliable narrator is a sort of public slave (“servicer”) with intimate connections to the global elite, and his conscious efforts to supply historical perspective mostly reference the 18th-century Enlightenment. It has really been a joy for me to read sf that is in overt conversation with Voltaire and de Sade!

Ada Palmer’s future world supposes a formidable transportation network that makes the whole planet local. Ethnic phenotypes and nationalities have become merely ornamental, while public expressions of human gender are socially discouraged. Religion has been actively suppressed by universal legislation, with individual spiritual needs ministered to by non-prostelytizing “sensayer” professionals. The largest polities are a handful of Hives which adults join voluntarily.

The Hive with the greatest population is that of the Masonic Empire, distinguished by–among other features–its official and social use of Latin. This detail reminded me at once of the Martian language in the Church of All Worlds in Stranger in a Strange Land. The connection is more than incidental. Like Heinlein’s touchstone work, Too Like the Lightning also concerns itself with sex and religion, and suspends much of its plot from the advent of a child with miraculous powers. In fact, there is an explicit allusion to Valentine Michael Smith (267).

The style here is however more Wolfe than Heinlein, where the fictional narrator’s exposition assumes a hypothetical audience whose needs are different than those of the 21st-century reader. Palmer cleverly highlights this fact with a device that has apparently irritated some reviewers: The reader is conscripted to protest elements of the narrator’s presentation, and given the actual verbiage of doing so, with these interjections distinguished by italic type and archaic diction.

The book is an ambitious and intricate start to a work I will certainly continue reading.