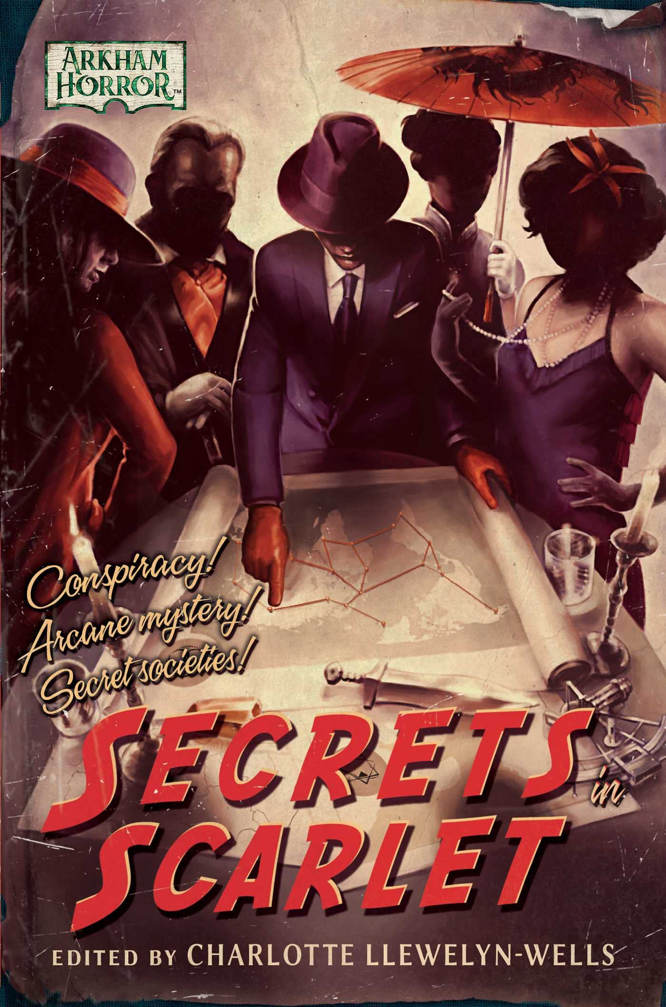 Secrets in Scarlet is the second volume of new short stories edited by Charlotte Llewelleyn-Wells and set in the Arkham Horror game milieu. Just as the previous book was oriented around the “Night of the Zealot” campaign in the core set of Arkham Horror: The Card Game, this one consists of background tales that flesh out the setting and antecedent plots of the recently-released Scarlet Keys Campaign Expansion. The campaign is built upon a cosmopolitan cast of conspirators whose lore goes back to Call of Cthulhu: The Card Game or even earlier. Known collectively as the Congress of the Keys, or the Red Coterie, these include the Red-Gloved Man, the Claret Knight, Amaranth, The Sanguine Watcher, and others. At least one of these characters features in each of the stories. There are also other incidental characters from the game, such as Li Flint and Ece Sahin.

Arkham Horror player-character investigators only appear in a few of the tales. Reporter Rex Murphy has a nautical fright in Lisa Smedman’s “Strange Things Done.” Stephen Philip Jones has written about security consultant Kymani Jones investigating a theft in “A Forty Grain Weight of Nephrite.” “The Red and the Black” by Josh Reynolds concerns the spy Trish Scarborough. The immediate events of the narratives all take place in the 1920s interwar period in which the games are set.

Seven of the nine stories are the elaborated forms of seven of the nine rumors in the bulleted list on page 10 of the Campaign Guide from The Scarlet Keys, with settings of Shanghai, Havana, Buenos Aires, Anchorage, Istanbul, and Marrakesh. There are no stories for the Nairobi and Kathmandu entries on that list, however. Instead, the first tale in the book is set in Manhattan, and the the final one is in Venice. These highlight the campaign’s explicit (though optional) inclusion of separately-distributed scenario packs, alluding to The War of the Outer Gods and Carnevale of Horrors respectively.

The literary quality of the stories is variable. Of special note is the contribution by M. J. Newman, who had a long tenure as the lead designer on the card game. As far as I know, the story “Crossing Stars” is Newman’s first published Arkham Horror fiction that is not embedded in game rules. I wasn’t impressed with the often affected diction here, e.g. “a sorcerer, able to manipulate the very winds of change with but a thought and the implementation of various esoteric componentry” (287). But the story made up for it with an interesting plot well connected to the central theme of the collection. I thought the best writing of the book was in the pieces by Smedman and Reynolds, but they all held my interest.

I am currently playing through The Scarlet Keys campaign in the card game, and I would definitely recommend this book of related stories to anyone in a similar position. Even for those with no involvement in Cthulhvian gaming, the suite of stories set against the background of a global conspiracy of alien sorcery and lost technology is enjoyable. At its best moments, it reminded me a little of Caitlin R. Kiernan’s Tinfoil Dossier books.