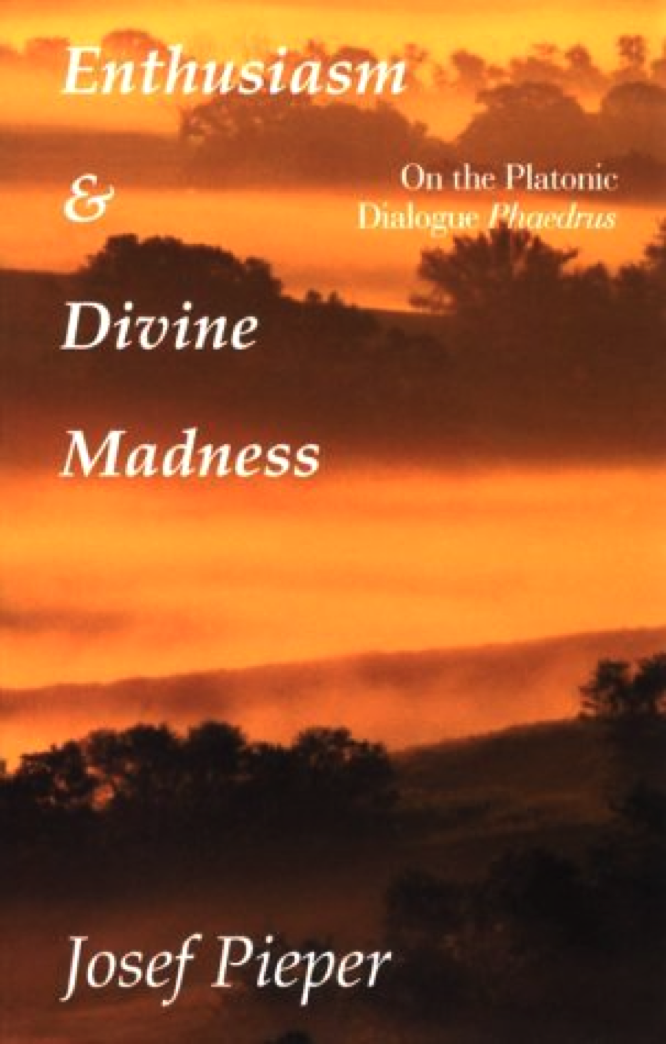 Had you told me I could enjoy an interpretation of Plato’s Phaedrus written by a German Neo-Thomistic philosopher noted for his sympathetic translation of C.S. Lewis, I would have been quite skeptical. Nevertheless, Pieper’s Enthusiasm and Divine Madness is accessible and engaging, although hardly as profound as other approaches I have read to the same dialogue.

To his credit, Pieper is concerned to encourage readers to explore the real issues of the dialogue, and not merely to treat it as a textual artifact. He assumes throughout, of course, that those readers will be Christian, heterosexual, and probably male. In his treatment, he proceeds through Plato’s text from start to finish, quoting seldom, but paraphrasing nearly its entirety.

The scene-setting and discussion of the earlier segments of the dialogue are especially good. Pieper is acutely conscious of how terribly funny so much of the repartee is. When it comes to discussing the frenzies, he dodges much of the matter of antique religion, evidently in an effort to keep the business “relevant” to the reader. In fact only the Muses are named out of the several deities in this section — Dionysos, Apollo, and Aphrodite go unmentioned. (For a contrasting treatment that grounds its relevance in those three gods particularly, see Aleister Crowley’s “Energized Enthusaism.”) Likewise, his treatment of the closing myth of Thoth both elides the divine characters of Tammuz and Thoth, and embraces the most superficial reading of the paradoxes in this writing about talking about talking about writing. (The reader who seeks an extreme sport of interpretation for this section must look to “Plato’s Pharmacy” in Derrida’s Dissemination.)

So while I may have found some of Pieper’s readings a bit shallow — especially in his anxieties to make Plato palatable for Christians — I still think he does a fine job of providing some context for the modern reader of the Phaedrus, and more importantly, throwing into relief the nature of the dilemmas addressed by the text. He intrudes very little of his own conclusions regarding the questions raised, even if he presumes a little too much about his readers. I suppose the presumptions were statistically warranted anyhow — at least in the mid-20th century when he wrote this book.