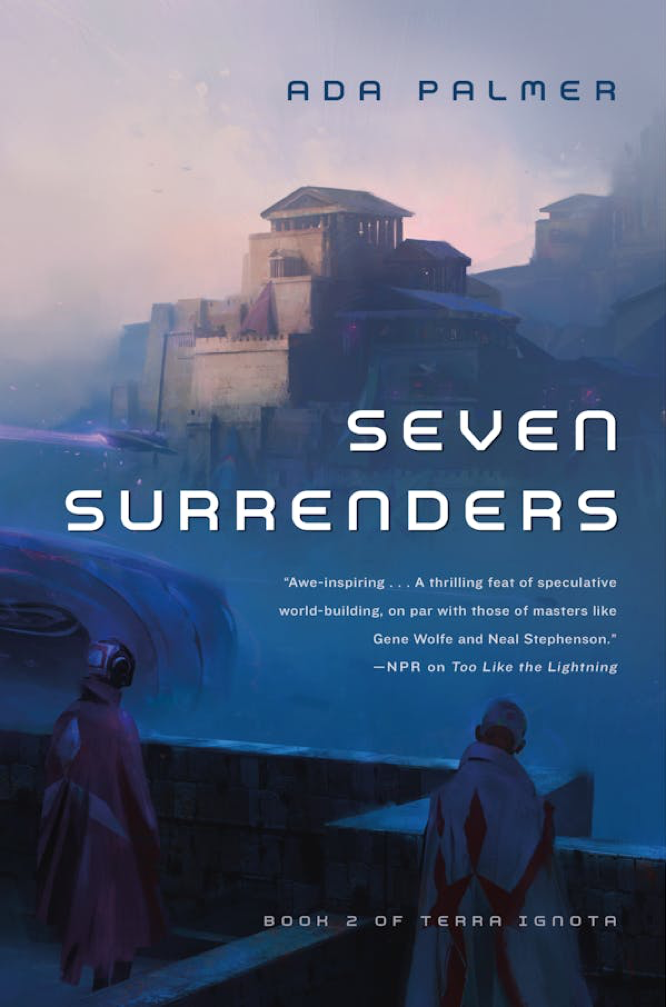 In Ada Palmer’s “Author’s Note and Acknowledgments” appended to Seven Surrenders she mentions such earlier science fiction writers as Alfred Bester, Jo Walton, Gene Wolfe, Arthur Conan Doyle, Voltaire, Yevgeney Zamiatin, and Yoshiyuki Tomino, among others. She does not include Frank Herbert, but the book that I was most reminded of in my reading of this second of four books in the Terra Ignota series was Dune Messiah, in the ways it expanded on the inventive world-building of its predecessor volume and in the incredible pitch of political and personal intrigue. The scale of Terra Ignota is smaller than the vast interstellar empire of Herbert’s Arrakis, but a global terrestrial society of the 25th century seems big enough for serious work.

In the midst of the story, Palmer uses a metafictional device to reflect on the ambitions of science fiction: “Apollo didn’t really think the war over Mars in two hundred and fifty years would be fought with giant robots, it was just the only way they could describe a war that would be meaningful, conscionable, with space for human dignity” (249-50). I wonder which aspects of Palmer’s own sometimes extravagantly-imagined future she finds least likely, but it is clearly not a prognostication. It is an engaging, immersive way to describe in high relief the tensions and vulnerabilities provoked by secularism, feminism, humanism, and other species of thought that have emerged from the Enlightenment with consequences yet to be determined in our present world. It also seems to be trying to sound the humanity that we share with Hellenic antiquity, in order to understand what of us can be maintained and/or transformed in centuries to come.

The four books of the series are evidently divided into two pairs, and this second completes the opening arc concerning the “Days of Transformation” that bring to its end an existing world order. While curiosity does drive the reader toward “the Crisis still unfolding” in the next two books, this one (unlike the first) offers some sense of a plot climaxed and concluded.