“The Copiale Cipher: An Early German Masonic Ritual Unveiled” by James D Hodgkins is an article, pointed out to me by the author, from the March-April 2012 issue of the Scottish Rite Journal which may be of interest.

“A curious enciphered manuscript was discovered in an East German library in 1970 and eluded all attempts at decipherment. The document was forgotten until it fell into the hands of a private collector and recently came to the knowledge of an international team of academics from the U.S. and Sweden. In April 2011 the “Copiale Cipher” was broken, studied, and released to the public six months later. It contained rituals that caused a great deal of excitement in the mainstream press. Due to translation errors, the press missed an opportunity to arouse public interest with another mysterious topic that often grabs headlines: the Cipher protected an 18th-century German Masonic ritual.” [via]

“The first sign that this was a Masonic document was when Bro. de Hoyos saw the German word mopsen [sic] and noted that it was mistranslated as “thieves” on the second page of the cipher. The sentence in which the word occurs asked whether the candidate was a member of any other secret order. The code breakers used scientific methods to determine the age of the document, but the word mopsen allowed Bro. de Hoyos to “guestimate” a timeframe of 1740s–1760s for the cipher’s age. Bro. de Hoyos noted that the “Mopses” were a pseudo-Masonic Catholic coed fraternity founded in 1740 after Pope Clement XII’s 1738 bull denounced Freemasonry. It consisted almost entirely of Germans and counted some of the most important members of German society as its members. The name derived from the German noun Mops, meaning “pug-dog “(which played a part in the society’s ritual), although the translators confused this with the verb mopsen meaning “to filch, to steal.”

The interpretation of the manuscript as the ritual of an ophthalmology society is due to the misinterpretation of one commonly used logogram (a symbol used in place of a word). The logogram , which the code breakers called “lip,” was interpreted to mean “oculist” or “eye doctor.” Bro. de Hoyos took a cursory read of the first page of the German text, recognized it as using the language of 18th-century German Masonic rituals, and realized the logogram in question clearly stood for Maurer, or “Mason” in English. Once this small change is made, the document opens itself up and becomes a great deal more legible for everyone. Most English-language writings on 18th-century ritual are concerned with English and French Masonry; this document provides useful primary-source insight into German Masonic ritual of that time.” [via]

“In a time of legitimate concern over such issues as declining membership within the Craft, it is encouraging that core aspects of our ritual and philosophy have remained unchanged for close to three centuries. Regardless of time or distance, one of the appeals of Masonry will always be the universality of the values we teach. The Copiale Cipher now serves as a new testament to this tradition.” [via]

I’d posted previously about the success made cracking the Copiale cipher, and that the text revealed the ritual of a previously lost German secret order called the Great Enlightened Society of Oculists, at “The Book of Law of the Venerable Secret Order of the Eye“. Today I noticed that over on Danger Room, there’s a […]

Now you can use the Online Copiale Cipher Encoder and the related cipher wheel to send and receive messages. It doesn’t translate your message into German and it doesn’t appear to use any of the Copiale glyphs with full word values, so it’s really just a substitution code with a partial Copiale cipher, but there it is. I don’t know if this means the Copiale cipher has jumped the shark yet, but it has definitely gained a critical mass of exposure now. At the very least, this could be a way to engage young learners around the Copiale cipher, codes, secret societies, security culture, and much more.

“The Copiale cipher is an encrypted manuscript consisting of handwritten characters. The manuscript included abstract symbols, as well as letters from Greek and most of the Roman alphabet. It is thought to date from between 1760 and 1780. In 2011, an international team announced that they had deciphered the manuscript. They found the original manuscript to be a German masonic text encrypted by a complex substitution code.

Use the Online Copiale Cipher Encoder to encrypt a message from any language into Copiale cipher. Then, give the cipher wheel below to your friends so they can decode your message!” [via] 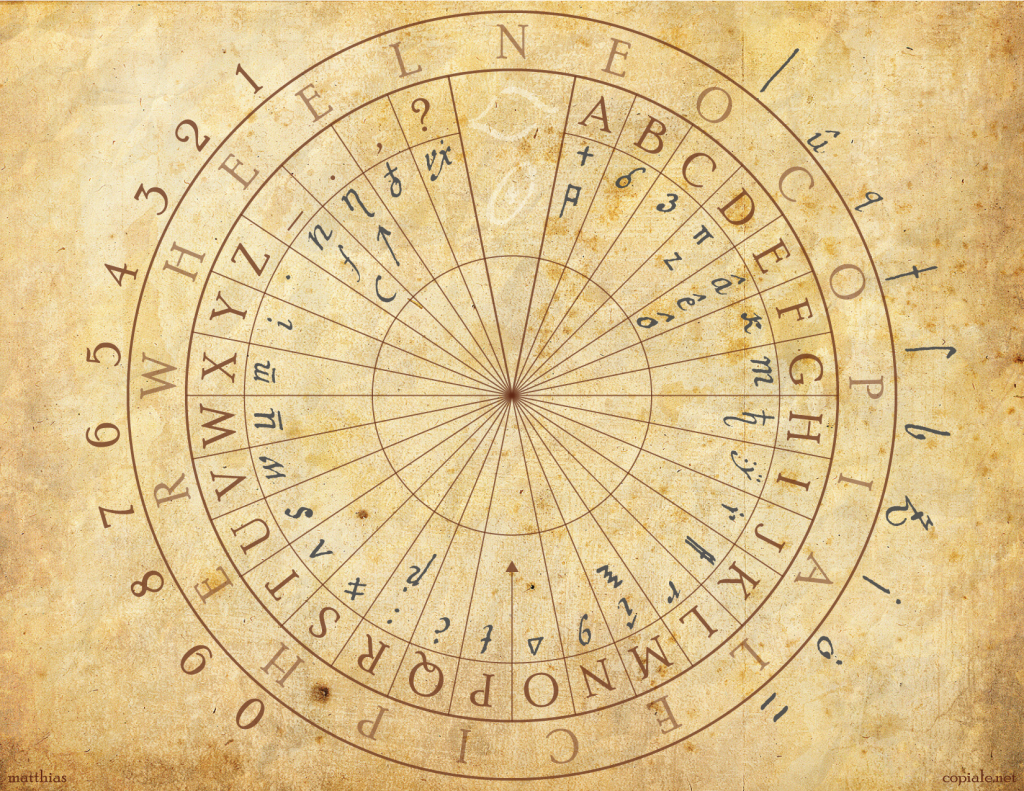 I, for my part, am looking forward to having my own Copiale secret decoder ring appear as a prize in my cereal box. But, if this doesn’t all seem amusing and interesting from my description, just consider that it’s funnier in Copiale …

Here’s a summary of Hermetic Library activity for the year 2017. Every year there’s so much going on, I’m sure I’m going to miss some things. Consider going through all past summaries for more details about what was going on each week of last year. However, here’s some important things that come to my mind […]

Here are the top 5 most viewed posts on this blog for this 2013 calendar year’s end: Leaf and twig design ring sets Da Pacem Domine (Last year’s 2nd also) Hello Aleister Crowley The Magician Kitty Satanic Knit Baphomet Sweater My Life with the Fill Kill Kult All but one of the top 5 are newly posted this year. The […]

When thinking about secrets and mysteries in practice, I’ve long tossed about the idea of a difference between secret societies, societies with secrets and a society without spoilers. Especially in this day when so much is being made available online, but that really is just a matter of scale when there are plenty of historical […]

I noticed a post over at Slashdot, “Copiale Cipher Decoded“, about how the breaking of the Copiale Cipher has revealed the previously coded instruction documents for the ritual of an 18th century secret order “that apparently had a fascination with eye surgery and ophthalmology.” Of course, for those interested in such things as secret orders, […]