The Search for Abraxas

The Search for Abraxas by Nevill Drury and Stephen Skinner, is newly released from Salamander and Sons. This is a second edition of the 1973 The Search for Abraxas, and I understand it will be distributed through Weiser Antiquarian, though as of this writing there is not yet in their catalogue, but it does appear to be available directly from the publisher. 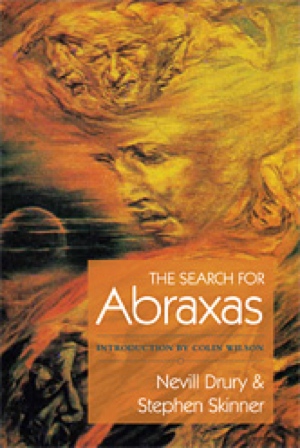 “‘There is an animal in man, and there is a God in man. In order to produce a harmonised microcosm these aspects of our nature have to be firstly acknowledged: it is then that the self may be transformed. Perhaps the God which best symbolises this mystical venture is the one who is both a man and a hawk; He who is of the Sun and whose legs are coiling serpents, symbol of Wisdom reaching down to Earth. He who holds the sacred shield … and whose name is Abraxas.’

Hailed as ‘the manifesto of a new generation’, The Search for Abraxas examines the nature of human potential emblematised by the transcendent Gnostic deity Abraxas – a figure associated not only with Time and Eternity, but also representative of the polarities of good and evil. Navigating the complex terrains of ‘The World of Light’, ‘The World of Shadows’ and ‘The World of Dreams’, renowned esoteric researchers and authors Nevill Drury and Stephen Skinner map the major themes of the Western esoteric tradition and elaborate upon the philosophies and cosmologies underpinning them.

From modern occult revivals and the international counter-culture and psychedelic revolution of the late 1960s to theoretical and practical qabalah and ceremonial magic; from witchcraft, sorcery and ‘transformation phenomena’ to astral and etheric projection and reincarnation, The Search for Abraxas reminds us that ‘magic is essentially about altered states of awareness that can lead alternatively towards cosmic transcendence and spiritual integration or towards dark alienation and even evil.’

Explorations of this duality – the polar opposites within the psyche – are particularly pronounced in the works of various artist-magicians, including the unconventionally brilliant and visionary Austin Osman Spare; the phantastically sinister yet transcendent Late Art-Nouveau, Decadents Aubrey Beardsley, Harry Clarke, Alastair, Edmund Dulac, and Kay Nielsen, and the Surrealists Yves Tanguy, Wolfgang Paalen and Max Ernst. This connection between magical thought and visionary art is a central motif of ‘this far-ranging and highly readable book.'” [via]

“Skinner and Drury met – at university – and Drury was impressed by Skinner’s Qabalistic erudition … Drury’s belief that the artist is a vehicle for, not a creator of, his artistic productions, produced a desire to explore methods of charting the hidden sources of inspiration. ‘The levels of inspiration achieved by different artists seems to me to parallel the stages of consciousness outlined in the Qabalah, and for this reason, one of my main aspirations is to achieve greater rapport with the higher levels of my unconscious.’ And so Skinner’s need for scientific exactitude and Drury’s desire to tap hidden levels of subconscious vitality combine in a common purpose. The first result of their cooperation appears in this far-ranging and highly readable book … What Stephen Skinner and Nevill Drury have done in this book is not to make an anthology of the weird and wonderful, but to state, with a kind of modesty and quiet precision, what they consider the relevant facts to be. It is their manifesto, and the manifesto of a new generation.”—Colin Wilson, from the introduction [via]