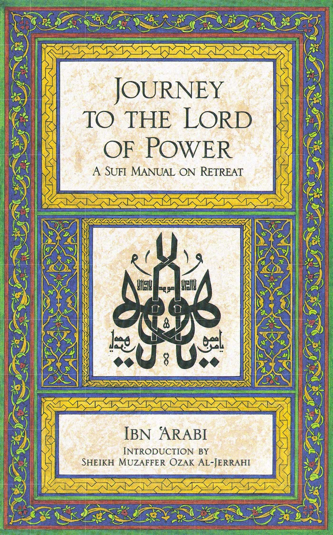 The “retreat” (khalwa) in the subtitle of Journey to the Lord of Power is not the sort of retreat where members of a religious community join together to temporarily devote their full attentions to spiritual concerns. It is rather the anchoritic sort of withdrawal by an individual mystic from the world as a whole. This medieval Sufi epistle is centrally concerned with a particular practice of direct attainment to God, to be undertaken in solitude. Translator Rabia Terri Harris identifies such attainment with the Night Journey and Ascension of Muhammad (3). Author Ibn al-ʻArabī cautions his correspondent about the danger of the practice, insisting that it should be undertaken only under the direct supervision of a teacher (shaykh), or by one who has mastered his own imagination.

In Thelemic argot this prerequisite mastery would be the “perfect control of the Astral Plane” demanded of a Neophyte according to “One Star in Sight.” The basic mechanism of the practice described here by al-ʻArabī seems to be fundamentally identical with that outlined as Sagitta trans Lunam or “Rising on the Planes” in Liber O. In fact, the bulk of the epistle is analogous to Crowley’s survey of the hierarchy of mystical trances at the end of “The Herb Dangerous,” to which Liber O refers the reader for “the results of success.”

The discussion of the practice and its results is supported with some metaphysical ideas. The first of these is “renewed creation” (khalq jadid). In the appended commentary from ʻAbd al-Karīm Jīlī’ (ca. 1400 C.E.) the explication of khalq jadid is redolent of Thelemic gnosis, in that it describes the “moment” (waqt) as the dialectical product of divine manifestation (zahir) and hiding (batin). A Thelemite will immediately understand these concepts to be figured by Ra-Hoor-Khuit, Nuit, and Hadit in The Book of the Law. In fact, the religious application of the manifest-hidden polarity has its root in the Quran: “He is the First and the Last, and the Manifest and the Hidden, and He has knowledge of everything” (57:3). It is very likely that the Prophet of Thelema received this concept from his Sufi instructor in Egypt. Another metaphysical notion explained here is that of the six Realms, general fields of experience within the cycle of human existence. O.T.O. initiates may be able to make a constructive comparison with the Third Triad degrees of that Order.

Furthermore, there are a couple theological points made, pendant to the main matter of the text. One of these is the distinction between saints and prophets relative to the attainments discussed here. (Continuing my effort at translation, Sufi “saints” are Masters of the Temple, and “prophets” are Magi.) The other is concerned to conserve the priority of Muhammad among the prophets, for the sake of Muslim orthodoxy.

Besides the al-ʻArabī text itself, this edition contains excerpts from the aforementioned commentary of Jīlī’, a translator’s preface, an introduction by a contemporary shaykh of the Jerrahi tariqa, a biographical essay on al-ʻArabī by another member of the Halveti-Jerrahi Order, and a useful glossary. It is illustrated by full-page calligraphic images of divine names, reproduced from large murals on the Grand Mosque in Busra, Turkey, originally painted in the nineteenth century. Even in black and white at less than a tenth of their original scale, these designs are very beautiful. [via]