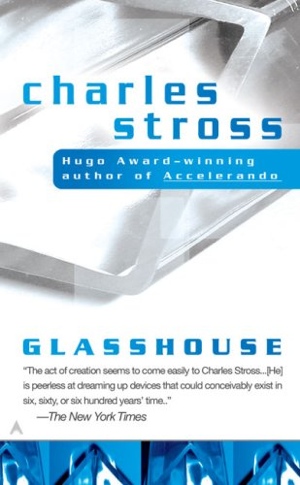 “Memory is liberty” (226). Charles Stross has a way with abstract nouns. In this book, he’ll remember it for you at medicare rates.

Glasshouse is a sequel of sorts to Accelerando, set in the same narrative future, but without any shared characters or locations. Unlike Accelerando, it is really a novel, and plotted like one, rather than a necklace of linked novellas. The plot is vividly phildickian, and emphasizes the ambivalence of prison/sanctuary, therapy/coercion, and similar concepts, along with conundrums of self-identification and possible paranoia. Stross uses the present-tense narration of Accelerando here, but the pacing and mood of Glasshouse are closer to Stross’ Laundry series.

Stross might have called the story Decelerando, since it mostly takes place in an attempted simulation of the “dark ages,” i.e. the terrestrial 20th/21st-century. Having his male narrating character enter that simulation as a housewife allows Stross to make a variety of observations about contemporary gender roles, reminding me somewhat of Sturgeon’s Venus-Plus-X.

Ultimately, though, this book is an espionage thriller with the sort of psychological touches that only the post-Singularity science fictional setting could afford. It reads very quickly, with a fair share of drollery. [via]