This video is a trailer for Brian Butler’s “Babalon Working” posted by MOCAtv. There was a screening on Sept 19th, which means this is a belated mention, but you can be on the lookout for the next showing.

To occult artist Brian Butler, aesthetics are ‘magick.’ Elevating mystic practices to the status of art—or elevating art to the status of ritual—Butler’s films and performances are themselves Orphic ceremonies and Satanic rites. Pentagrams, triangles, liturgical hoods in red, white, and black, these iconographic shapes and costumes have a sacred as well as aesthetic function. The arresting imagery and trance-inducing editing of his latest short film The Babalon Working: a Shortcut to Initiation are no exception. Butler’s mentor and collaborator Kenneth Anger once compared making a movie to casting a spell. Perhaps this film will make that assertion literal: The Babalon Working was a ritual devised and practiced by occult master Jack Parsons to manifest Babalon, the divine feminine. Watch and wait.” 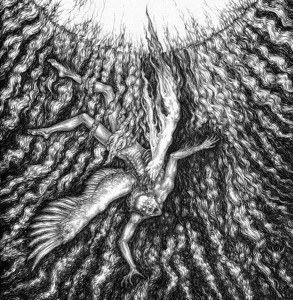