I:MAGE 2014 – Travelling with Unfamiliar Spirits, the second exhibition of esoteric art from Fulgur, will actually be a series of events in London and online from October 21st through November 2nd, 2014, with art, events, publications and stories.

“The spirit world comes to life in this two-week-long celebration of esoteric art. The show’s theme coincides with the time of year: the beginning of the dark months. Popular culture calls it Hallowe’en but contemporary Witches and Druids across Europe and North America call it Samhain, Heathens Winter Nights, Greek reconstructionist movements Thesmophoria; Vodou practitioners celebrate Fete Ghede, followers of Santeria and indigenous religions in Latin America observe Día de los Muertos, while Welsh folklore advises staying away from cemeteries on Calan Gaeaf.

In most magical and esoteric traditions the end of October is a sacred time of year, a time for honouring the dead and communicating with the spirit world. It is a time to acknowledge the winter months and delve into the darker part of the year and of the self. The boundaries between the familiar and what is Other shatter. The veil is thin. The magic begins. For I:MAGE 2014, artists will explore what it means to communicate with spirits through art. They will give us a glimpse of a unifying theme across different esoteric practices and offer us the perfect opportunity to introduce you to a truly international show.” [via]

At the core is a selling exhibition hosted by Fulgur Esoterica that brings together an a number of international artists in the esoteric genre. That exhibition will take place at Cob Gallery in London and feature a number of artists.

Of particular interest, for those not nearby London, may be the artist blogs but especially Veil of Dreams: A Pilgrimage through Icelandic Magic with Jesse Bransford and Max Razdow, an interactive esoteric art project which you can start following now and in which you can participate.

Artists Jesse Bransford and Max Razdow set out to inhabit the same dream space for six months, blog about it and travel across the world to tell the story. Their starting point: Icelandic Magic.

For the next five months Jesse Bransford and Max Razdow will use Icelandic magical symbols as a reference point to enter the larger dream divination space of the Seiðr traditions and to synchronise their dreams. The results are published here on a daily basis. The project will culminate with a pilgrimage: the artists will travel to Iceland to visit sacred sites, perform a series of workings and find physical correspondences with their shared dream experiences and then to London, where they will exhibit the journal, the original artworks emerging from the dreams and be interviewed about their experience. Be a part of their story. [via]

Abraxas: Issue 4, edited by Christina Oakley Harrington and Robert Ansell, from Fulgur, is due to release on September 20th, 2013, which includes many new works, features a 30 page facsimile, a previously unpublished manuscript, of Fragmentum by Austin Osman Spare, and more. 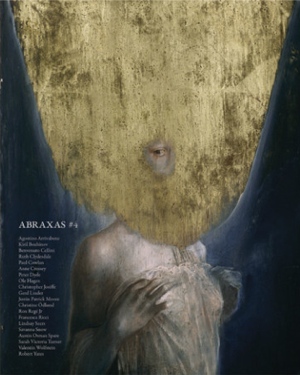 Printed using state-of-the-art offset lithography to our usual high standard, contributions for Abraxas #4 include a previously unpublished manuscript by Austin Osman Spare entitled Fragmentum presented here in facsimile over 30 pages; a special feature on the Italian artist and mystic Agostino Arrivabene; dramatic images of urban vodou from photographer Shannon Taggart; an interview by Sarah Victoria Turner with Christine Ödlund that discusses her art practice, synaesthesia and Theosophy; explorations of the symbolism of the tarot Fool from Valentin Wolfstein, an experiment in urban sigils from the London-based artist Francesca Ricci, and more.