Occlith 0: Omniform by Joseph Uccello is a new release from The Viatorium Press and Three Hands Press, available from Weiser Antiquarian Books. 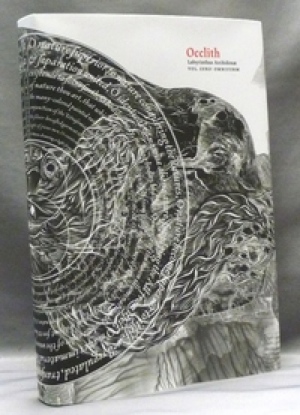 “Since 1992, Xoanon and its sister publishing house Three Hands Press have pioneered the art of occult publishing, their practice driven by the philosophy that a truly magical book transcends the medium of its material embodiment. In part, this has been achieved through sublime qualities of exceptional content and artistry: original text, image, and type design which are undeniably possessed by the inspiring spirits which animate the volume. In the most potent of instances, the book coalesces by a hidden and vital anatomy, whose heart pulsates with life. Historically, the phenomenon of the magical book has appeared at the confluence of magic, mysticism, artistic inspiration and high craftsmanship. Nowhere is this as evident or beguiling as in the corpus of European alchemical texts, created in the ascendancy of movable type, where individual spiritual revelation came to inform both how the Royal Art of Alchemy was understood, and how books were made.

In collaboration with The Viatorium Press, and in the spirit of furthering the modern tradition of the Magical Book, we are pleased to announce Occlith Omniform 0 from award-winning artist, typographer and printer Joseph Uccello. Containing essential texts of the Paracelsian School of Alchemy, the whole serves as an animated sourcebook of essential Hermetic philosophy and Natural Magic, vivified through the letterpress-inspired type design and Uccello’s masterful ink and brush drawings. In addition to the lavishly-illustrated alchemical texts, Omniform includes an essential lexicon of alchemical terms, and an original Introduction by Uccello serves as the portal of ingress into this Corporeal Book.” [via]

You may be interested in Ouroboros Press‘s Theatrum Chemicum Britannicum book launch event [also] at Fields Book Store in San Francisco on March 22 at 7:30pm. 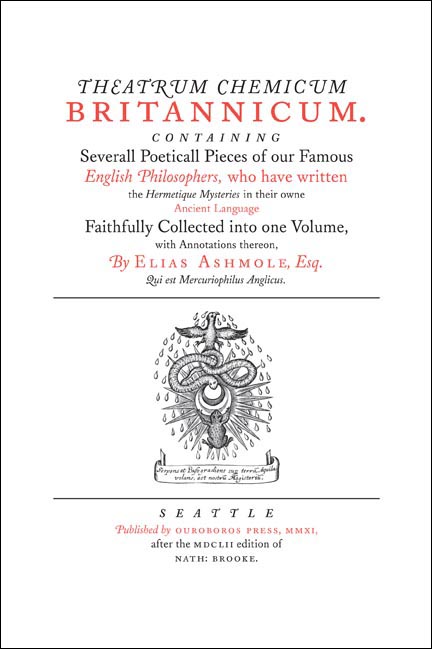 “Ouroboros Press director William Kiesel will give a brief talk about Elias Ashmole’s alchemical classic and discuss its relevance in book arts, literary, and historical contexts.

The Theatrum Chemicum Britannicum is a major collection of English alchemical texts which encapsulate the arcana of the Magnum Opus in poetic form. Originally gathered from several rare medieval manuscripts by Elias Ashmole, the text represents the largest collection of verse treating of the production of the Philosopher’s Stone to be brought together in one volume. This edition is corrected using Ashmole’s errata sheets, revised to include more complete versions of several texts, and re-typeset.

A letterpress broadside of The Golden Chain of Homer will be a gift to each attendee at the book launch who purchases a copy of the book. Additional copies may be purchased for $40.00.” [via]

“The Theatrum Chemicum Britannicum is a major collection of English alchemical texts which encapsulate the arcana of the Magnum Opus in poetic form. Originally gathered from several rare medieval manuscripts by Elias Ashmole, the text represents the largest collection of verse treating of the production of the Philosopher’s Stone to be brought together in one volume.

Ashmole’s pride in English literature is amplified by the consideration he gave to the project. In deciding which texts should be included in the book he details ancient British examples among the Druids & the Bardic Tradition and explains that poesy is much better than mere verse.

Here we find well known names in the alchemical corpus among whom are included; Thomas Norton, George Ripley, Geoffrey Chaucer, John Daston, Pearce the Black Monke, Richard Carpenter, Abraham Andrews, Thomas Charnock, William Bloomefield, Edward Kelley, John Dee, Thomas Robinson, William Backhouse, John Gower, John Lydgate, W. Redman and several anonymous authors. This who’s who of English alchemists is placed in historical context by a Prolegomena by Ashmole, which supports his thesis that England may be proud of its alchemical literary heritage. In addition Ashmole has provided ample annotations and commentary to each of the texts as supplementary material in the concluding chapter of the book. The text has a new introduction by William Kiesel and a full bibliography of alchemical and bibliographic materials used in researching the text.

This complete edition of the Theatrum Chemicum Britannicum goes beyond the mere reprinting of the original pages as past facsimiles have done. Using the original errata sheets provided by Ashmole, the entire text has been corrected and reset in a more readable typeface and features clear reproductions of the original engravings produced by Robert Vaughan. In addition, this edition features a more complete version of the Breviary of Naturall Philosophy by Thomas Charnock by employing a complete manuscript of the text not available to Ashmole in 1652. This is the most ambitious publishing project embraced by Ouroboros Press in its years of laboring to bring source works of western esotericism to scholars and collectors alike. Over a dozen individuals and institutions worked hard to bring the book into this complete and corrected edition. This is fine esoteric book arts at its best, a volume Elias Ashmole himself would be proud of.