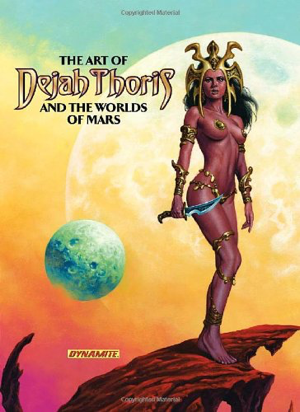 This book collects what seems to be most, and perhaps all, of the cover art to its date (2013) for the various Dynamite comics based on the Mars of Edgar Rice Burroughs. The page size is large, about twice that of a US comic book, and all of the reproductions are in full color on glossy paper. There is a text introduction discussing the history of depictions of the Martian princess Dejah Thoris and her world, with some thoroughness and detail. But for most of the book, the only text is the identification of the artists and original publication info for each image.

As a comics publisher, Dynamite has the annoying practice of producing comics with alternate cover art, presumably in an effort to get fans to buy multiple copies of single issues. In this book, though, they do collect all of the alternates along with the basic cover art, and they include “risque” covers (originally available as retailer premiums), which are often variants of other cover art in which the princess is en déshabillé. However, the character (as originally delineated by Burroughs) wears so little clothing in the first place that such a difference often amounts to little more than whether her nipples are golden or flesh colored!

The quality of the art is not uniform, but the good stuff is awesome, and hardly any are miserable. Artists whose work I particularly favor include Joe Jusko, Paul Renaud, Wagner Reis, Lucio Parillo, and Jay Anacleto.

This book really is beautifully produced, and it’s worth more to me than all of the original Dynamite comics combined, with its generous size and text-free presentation. The title is accurate: although there are some well-imagined tharks, Martian apes, and banths, and John Carter appears occasionally, the clear focus throughout is on the paragon of Barsoomian pulchritude herself. [via]