I like the title of this book, but it’s not really transparent to the volume’s content. More lucid choices might have been The Exorcism of William S. Burroughs, or Old Beatniks with Guns, or most accurately Reminiscing and Cat Fancying with Bill and Al. It’s a carefully edited full transcript of about sixteen 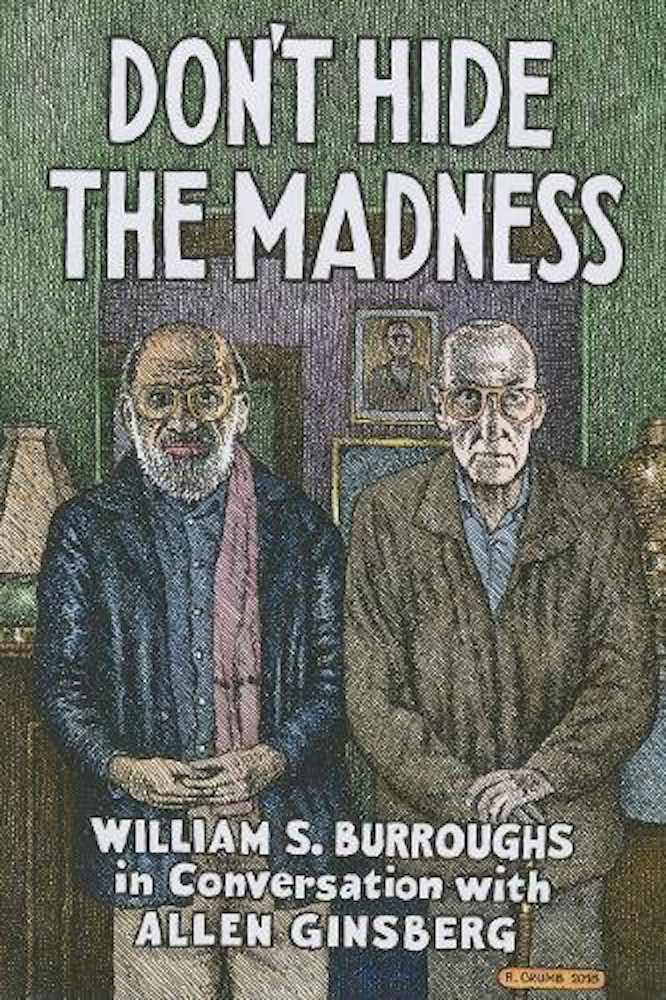 hours of conversation between William S. Burroughs and Allen Ginsberg, at Burroughs’ place in Kansas over the course of four days in March 1992. The Naked Lunch movie release in England and Japan was the impetus for an “interview” that grew into the more relaxed-yet-ambitious project of capturing the conversations in this book, as sponsored by the London Observer magazine. Within the text, this circumstance isn’t mentioned until two days and over one hundred transcript pages into the visit, and it only occupies the foreground of a single conversational session. The transcripts were prepared from the tapes and edited by musician Steven Taylor, who had been working as Ginsberg’s assistant and a contributor to his performances.

Burroughs was pleased by Cronenberg’s Naked Lunch, so that forms a focus for some of the discussion. During the course of Ginsberg’s visit, the two of them and some friends go to a local screening of the movie. Another principal activity is a brief trip to fire a few of Burroughs’ guns. But probably the most significant event during the visit was Burroughs undergoing an exorcism of the “Ugly Spirit” (so identified by Brion Gysin) that Burroughs believed had been responsible for making him shoot his wife to death in Mexico in 1951. The exorcism was performed by a Native American shaman named Melvin Betsellie. Discussion often returns to the health concerns of the two men. They review various mutual acquaintances and old experiences, and discuss a number of literary figures and social scenes. Occasionally one will read out loud from a book or an article, and Ginsberg and Burroughs both recite poems from memory. Burroughs very frequently breaks off to address himself affectionately to one of his six cats.

The lack of an index is disappointing in a book that is practically an orgy of name-dropping, and includes a fair amount of trivial conversational context. Some topical metadata to reference persons discussed are in Ginsberg’s synopses of the tapes, used as chapter headers and reproduced in the table of contents. But if you want to find the four mentions of Harry Smith for instance, you’ll just have to read right through. Likewise, a key to the abbreviations used for attributing speech would be very helpful. WSB and AG are obvious enough, but identifying the other speakers from their abbreviations may require careful reading of the editor’s introduction and the synopses. I was reading an advance review copy (via the LibraryThing Early Reviewers program), so either or both of these failings of the editorial apparatus might be addressed in the actual first edition.

The cover art by R. Crumb is a lovely portrait of the two men, and there are some black-and-white photos of Burroughs taken by Ginsberg on the weekend of the conversation, along with some other photos of the men that are not credited.

I enjoyed this read, and it renewed my interest in reading some of Burroughs’ later novels. It’s definitely a book for someone who can bring to it an existing appreciation for Burroughs, at least. The reader also needs an ability to savor the conversational minutiae of old men, or failing that, some talent for skimming.