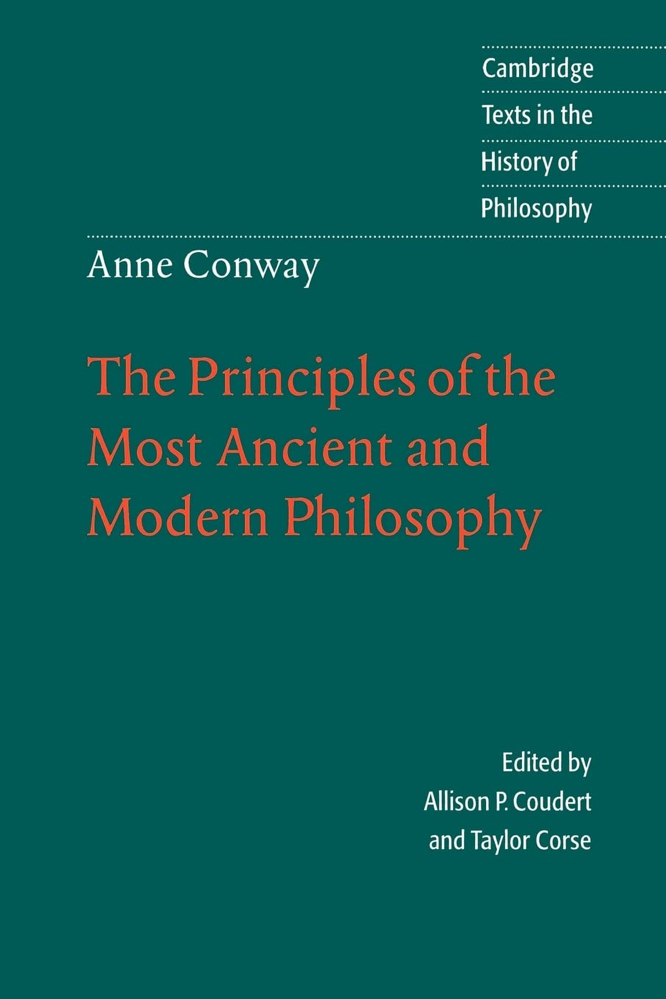 The historical existence of Anne Conway was a thrilling surprise to me. Here was a 17th-century Englishwoman who had been trained in Cartesian philosophy, Lurianic kabbalah, and Helmontian chymistry. She was an acknowledged influence on Leibniz, and she had an active rapport with the first generation of Quakers. All this excitement and more is available in this volume’s introduction by Allison P. Coudert.

The primary text being introduced is decidedly less engaging. It is a manageable treatise in nine sections, trained primarily on theoretical natural philosophy, in primary opposition to Descartes, but also at the end taking up against Spinoza and Hobbes. Conway is careful to keep her positions defensibly Christian, and even includes the occasional “proof” from scripture. She also relies on allegedly empirical facts about spontaneous generation of animals from rotting matter (data furnished by von Helmont, evidently).

On the plus side, her notable positions include:
a) Staunch opposition to any dualistic divide between matter and spirit. She insists that these are the poles of a graduated continuum.
b) Reincarnation, including the passage of individuals between the forms of humanity and different animal species.
c) Understanding of spiritual and material organisms as manifold, and infinitely divisible into component organisms, in an open hierarchical fashion.

It’s not too onerous a read, but the actual Conway text is somewhat ponderous. Still, it complements my earlier studies in English supernatural alchemy. I also expect it to be helpful background in my ongoing Blake readings this year, since as Coudert notes, the treatise is a sterling example of the sort of esoterically-grounded English Renaissance thought that provided a springboard for both the Enlightenment and reactions against it.