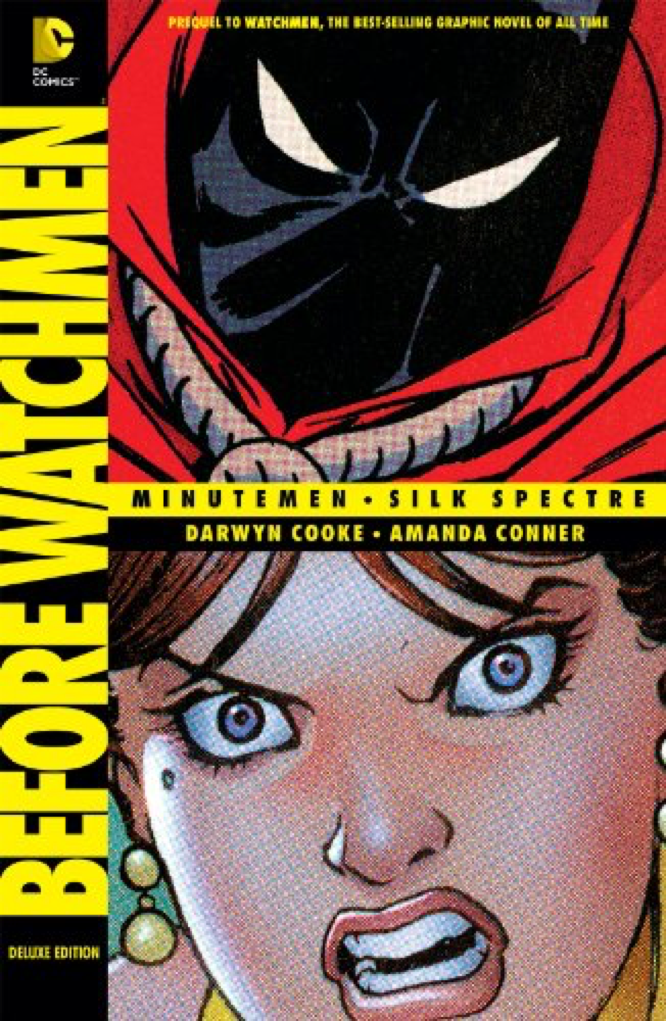 This volume collects two of the Before Watchmen series that DC commissioned and published against the wishes of Watchmen author Alan Moore. The first series is the six-issue Minutemen, chronicling the WWII-era predecessors to the Watchmen, and the second is four numbers of Silk Spectre, with a story about Laurie Jupiter in the 1960s. Darwyn Cooke serves as auteur for Minutemen, both writing and drawing throughout, and he gets a co-writer credit on the Silk Spectre issues by Amanda Conner. I wasn’t interested in the individual issues when they were on comic shop shelves about five years ago, but curiosity got the better of me when I saw this book at the public library.

The opening of Minutemen is clever and effective. Cooke imitates Moore’s portentous voice and the panel designs from Watchmen (i.e. stacked full-width panels, with a repeating geometric motif–in this case the centered circle that turns out to be a clock), only to pull the perspective back and reveal Hollis Mason (the original Nite Owl) frustrated with his own prose style as he composes his memoirs. That breaks the tension and assuages the anxiety of influence so that Cooke can get down to work telling a story that really does share the ethos of Watchmen in exploring the interactions of deeply flawed costumed vigilantes and their efforts to work together as a team. Cooke’s visual characterizations are very different than those of Watchmen artist Dave Gibbons, but still suited to the material.

I was not as pleased with the shorter Silk Spectre story. It has Laurie running away from home and going to San Francisco to fall in with the sixties counterculture. It cast Owsley Stanley as a villain, collaborating to use hallucinogenic mind-control to re-instill materialistic consumerism in hippies. Neither Laurie nor her mother Sally were especially likable characters–the general approach of highlighting their personal flaws seemed to backfire here. I did enjoy Amanda Conner’s art, though. It has a polished 21st-century comics ambiance, and she did excellent work depicting the retro-psychedelic subject matter.