Freemasonry: Foundation of the Western Esoteric Tradition by Angel Millar, from Salamander and Sons, available in 2013, supposedly available from Weiser Antiquarian but not appearing in their catalog, may be of interest. 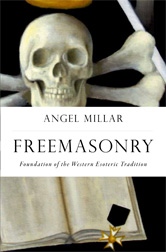 “In the early 18th century the Masonic fraternity emerged to change the shape of the Western esoteric tradition forever. Within a few decades the fraternity had spawned numerous esoteric societies that claimed to communicate with spirits, teach the secrets of alchemy, and to perform rituals of healing. During the next century the still-surviving Masonic Rosicrucian society was established, attracting the founders of the Hermetic Order of the Golden Dawn — William Wynn Westcott and S.L. MacGregor Mathers ‐ and Theodor Reuss, co-founder of the Ordo Templi Orientis (O.T.O.), among others.

Freemasonry: Foundation of the Western Esoteric Tradition explores the history of Western esotericism, beginning with the early Masonic Ritual, and its symbolism of natural law and death, essential to understanding the Craft, high-Degree Freemasonry, and the contemporary Western esoteric tradition. Other subjects explored include: