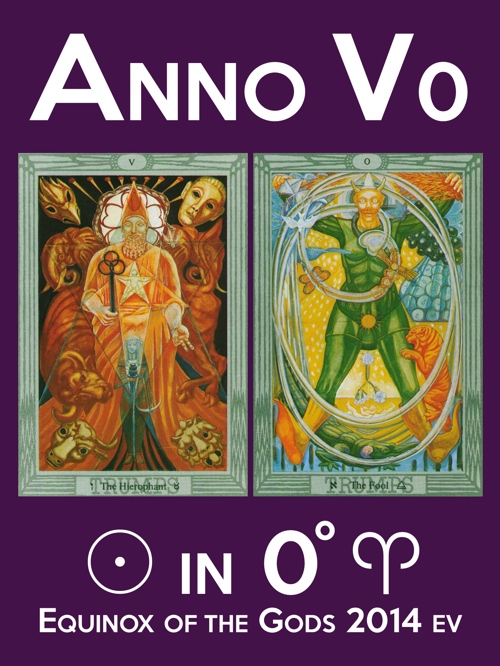 This Equinox of the Gods Poster is helpful propaganda from the Hermetic Library Office of the Ministry of Information … for this Thelemic Holy Day in Anno V0. This Thelemic year is associated with Atu V, The Hierophant, and Atu 0, The Fool, from Thoth Tarot, and today is beginning of this new year in the Aeon of Horus, which occurs at the anniversary of the Equinox of the Gods, 1904 EV.

“If these divisions are taken Qabalistically, the T of the 4T may be seen as Taurus, the 6 of 6ω as the central Sun, the 4 also as the equal armed cross and the horns of Aries as the inverted omega at the base. 9G on the left boundary of the 4T may be seen as the lunar crescent crowning the figure as both the moon and the horns of Taurus, and by duplication, the horns of Aries as its base. The a24 on the left boundary may be equated with the 24 Theorems that divide the text of the Hieroglyphic Monad, and may also be associated with the critical place that the number 24 and its value play in the mathesis of the Monad.” [via]