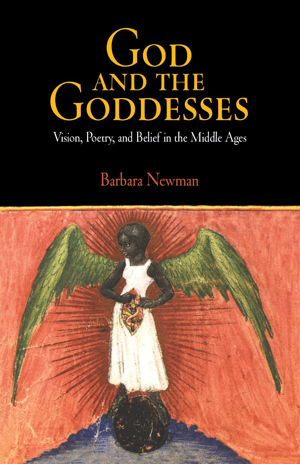 Barbara Newman coins a new genre label in the final chapter of God and the Goddesses, partly in order to justify the joint treatment of the rather heterogeneous literature that she has surveyed here: imaginative theology. What these particular works have in common, beyond their high-medieval origins, is the presence of feminine divine figures in Christian settings. She pulls together a wide (though not exhaustive, she hastens to observe) variety of texts featuring Dame Kind (Nature), Caritas (Love), Sophia (Wisdom), and Mary (daughter, mother, and bride of God). To the extent that these figures have been objects of modern scholarship, their theological significance has often been lightened by regarding them as allegorical personifications, and by a retrojection of post-Tridentine theology that is in fact more self-conscious about gender issues than were the perspectives of medieval thinkers, who were quite capable of using the term “goddess” and/or “daughter of god” in reference to the chief figures of this study.

While this book discusses theology, and may have theological consequences for some readers, its methods are primarily those of literary analysis and art history, and its motives those of comparative religion and historical inquiry. Newman writes: “For our subject is not simply ‘goddesses’ but ‘God and the goddesses,’ with an emphasis on the links between medieval Christendom’s ‘real’ God and the figures of female sacrality that surrounded his throne” (49).

A crucial issue in this study is the relationship between visionary states and literary composition. Noting the inadequacy of medievalist Dinzelbacher’s discrete categories of “experiential” and “literary” visions, Newman proposes instead a distinction between the epiphanic and heuristic functions that may be present in any visionary text. This approach helpfully accommodates the actual overlap between visionary categories, as well as promoting a sage agnosticism regarding the mental and compositional processes of visionary authors.

Beyond the scholarly intentions and arguments of this book, its particular literary cases often spoke to me in my own mystical and magical situation. In particular, Lavision-Christine, a text with which I’d been unfamiliar, presents a celestial couple consisting of the masculine Chaos and an unnamed “crowned shade in the form of a woman,” who together are responsible for the world of the visionary (120). The general review of the Sophia current was helpful to me, and motivated me to a rereading of Ecclesiasticus. I was already acquainted with Aurora Consurgens of course, but the treatment here of feminine figures in alchemy really whetted my appetite for the contemporaneous Buch der Heiligen Dreifaltigkeit. Alas, Newman notes that the only available edition of this one is “far from satisfactory” (386). Perhaps most valuable to me were the materials regarding the incorporation of Mary with the Holy Trinity into a sort of familial tetrad.

There is no automatic correspondence between the medieval promotion of the goddesses treated here and any sort of feminism, as Newman observes. In one register, these figures are goddesses to the extent that they are not women; they transcend the human condition and are set over its important functions. Nor did the presence of these goddesses in any given discourse tend to provoke claims or findings of heresy. The goddesses of medieval Christianity represent, in Newman’s words, “a current of piety that was unofficial, but by no means marginal; undogmatic, but hardly unorthodox” (50). [via]