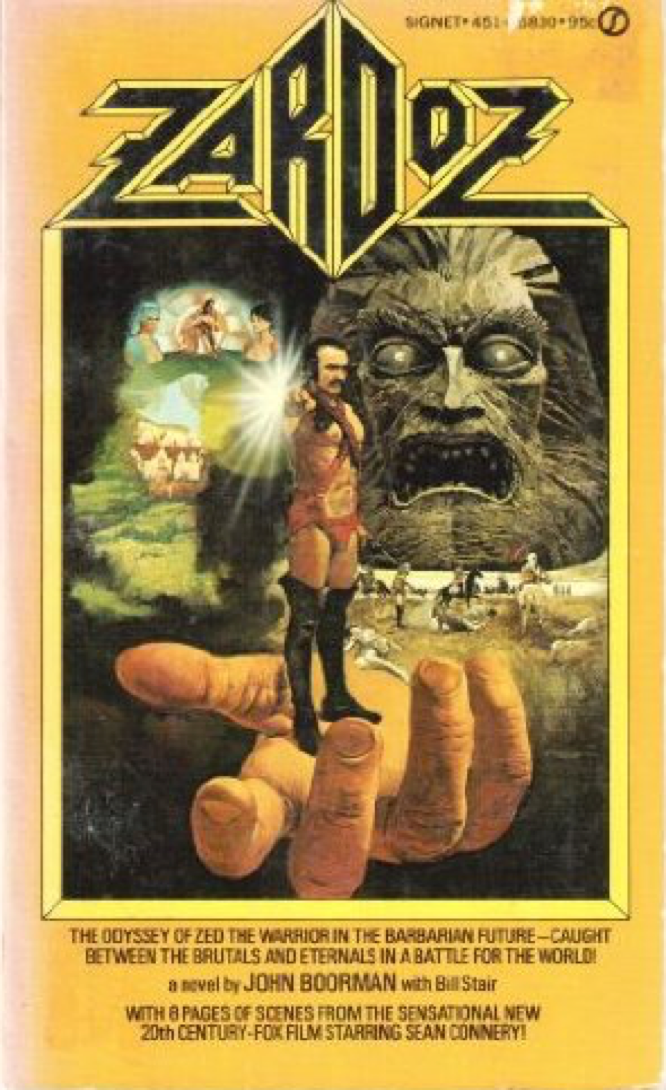 Like Arthur C. Clarke’s 2001: A Space Odyssey, John Boorman’s book Zardoz has a complex, complementary relationship with the film of the same name. Although composed after the film, it also incorporated features from earlier drafts by the filmmaker/author and is far from a mere “novelization.” In his preface, Boorman characterizes the book as “an interpretation of the film” as well as something of an exorcism to address the spirits which possessed him to write, produce, and direct the movie in the first place.

There is no real difference in plot, character, or theme between the movie and the book. The book omits the film’s prologue from Arthur Frayn, replacing it with a glimpse of the initial activation of the Tabernacle. And it affords a little more detail regarding the protagonist Zed’s history, experiences, and intentions. In both media the story is set in 2293 on an Earth that has long suffered a complete division between a cloistered superhuman elite of Immortals dwelling in hidden Vortexes on the one hand, and a post-apocalyptic remnant of Brutal humanity inhabiting poisoned Outlands on the other. Zardoz is the story of a Brutal’s invasion of a Vortex.

In terms drawn from ancient Gnosticism, we can consider the Immortal Arthur Frayn (a.k.a. Zardoz) to be a Demiurge, a duplicitous “architect” god-magician who creates among the Brutals a race of Exterminators culminating in its messiah Zed. (“Zed” is the English for omega, the last letter of the Greek alphabet. See Rev. 22:13.) Zardoz deliberately disillusions Zed with an exposure of his own falsity, driving Zed to seek the Unknown God in the Vortex, where the Immortals are in the role of Gnostic archons. They are emanations of the Pleroma, the ultimate divinity in the Tabernacle. By the end of the story, though, these valuations have been reversed: the Vortex is in fact a prison-world with the Tabernacle as its Demiurge. The Immortals have been condemned to degrade eventually into inert Apathetics or self-hating Renegades, without ever being allowed to die. Zed is their deliverer, and the bearer of a spark that can regenerate this corrupt race of deluded pseudo-gods.

Zed at one point cites and quotes Nietzsche: “He who fights too long against dragons, becomes himself a dragon” (110). And this bit of philosophical name-dropping has more than a little relationship to the larger themes of the story. Nietzsche notoriously remarks, “God is dead. God remains dead. And we have killed him. How shall we comfort ourselves, the murderers of all murderers? … Is not the greatness of this deed too great for us? Must we ourselves not become gods simply to appear worthy of it?” (The Gay Science §125) The death of God is enacted in various ways throughout Zardoz: Zed’s religious disillusionment, the murder of Arthur Frayn, the destruction of the Tabernacle, the slaying of the Immortals, and the fall of the Zardoz head. Zed is himself a Nietzschean overman: “a mutant. A second, maybe third generation. Therefore genetically stable … mentally and physically vastly superior …” (60-1). He must overcome his role as a Brutal, and the Immortals must go under for life to be renewed.

The Übermensch Zed was produced through the experimental artistry of Arthur/Zardoz. The murderous cruelty of the Exterminators is central to the program to create a “slave who could free his masters” (124). But within the Vortex, although they first view the Brutal Zed as a mere animal, there are no slaves or masters. The Immortals are the “last men” whom Nietzsche’s Zarathustra anticipates with horror: “No shepherd, and one herd!” Their constant, technologically-mediated plebiscites enforce an emotional uniformity. “People still fall out, but are soon reconciled—otherwise it spoileth their stomachs” (Thus Spake Zarathustra, prologue §5). For all of their vaunted longevity (not really immortality in the end), the Vortex inhabitants do not value or promote “life” in the Nietzschean sense, and it is left to the Exterminator Zed to declare, “This place is against life” (93).

Vortex society seems more congenial to homoerotic relationships (May and Consuella, Friend and Arthur) than to heteroerotic ones. Procreation has been abandoned long ago. When confronted with the fact that “Eternals … discovered that erection was impossible [for them] to achieve,” overman Zed is aghast at their estrangement from “their true selves” (56).

Both book and movie refer to other Vortexes — the one invaded by Zed is Vortex Four. Some of these Vortexes are on paths of interstellar colonization, which was supposed to have been an original motive for developing the technology of the Tabernacle. But the other Vortexes are disregarded in the end, presumed to be equally ill-fated. The social and psychological mechanisms of the system provoke pathologies of compliance (the Apathetics) and resistance (the Renegades), which eventually deplete the productive population to the point of failure.

Vortex Four does not merely fail, though; it is sacrificed. Ultimately, Zardoz is Jesus (second time as farce) as Arthur Frayn embraces his own execution, and that of most of his peers, in order to promote a new form of life: their resurrection in the line of Zed. [via]