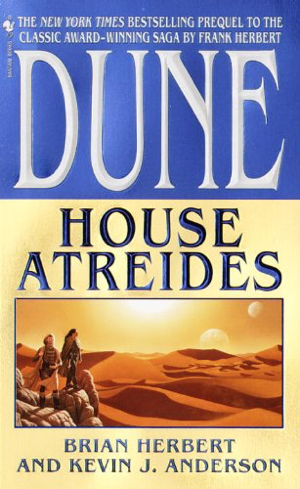 This is, of course, a prequel to Frank Herbert’s classic saga, written by his son. You really have to feel for Brian here, since he really can’t win as he sets himself to add on to one of the most complex and beloved novels of the century. As far as I’m concerned Frank Herbert himself never really did a proper job on his own sequels, so what hope do we have here?

Set about forty years before the events of Dune, this is basically a collection of interconnected narratives about the characters it that book and how they got where they were. Leto Atreides is a teenager being sent to an allied world for his education, Vladimir Harkonnen is thin (!) but still his familiar decadent self, Shaddam is an impatient Crown Prince, and the Bene Gesserit are just beginning to arrange the conception of Jessica. There is no real plot holding all this together, just threads leading to the start of the original novel.

The real problem here is that despite all the best efforts the whole book just feels wrong. Many of the events seem quite outlandish, the characters are way too familiar with secrets that were/will be hidden from them in Dune, and worst of all they talk wrong. In Frank’s novel we were transported to a milieu that was far removed from our own where people had very different attitudes and manners. Brian and Kevin make them talk like Americans and they even use catch-phrases like “think outside the box!”

If you’re a Dune fanatic you will probably want to read this, but I’d suggest you borrow a copy and save your money for something better.