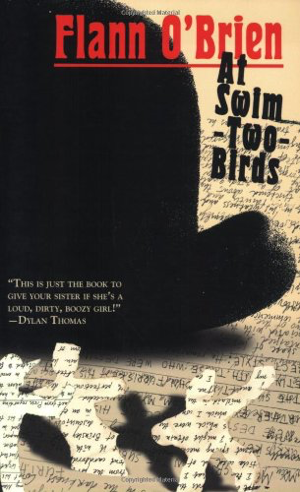 “Flann O’Brien” is one of several nom de plume’s of Irish writer Brian O’Nolan, best unknown by most for his 1939 masterpiece of experimental fiction At Swim-Two-Birds. Cited by Time magazine as one of the best 100 English language novels between 1923 and 2005, both book and author remain virtually undiscovered by the mainstream. Sometimes associated with the later “Angry Young Men” movement in Irish literature and J.P. Donleavy’s novel The Ginger Man, in reality, they are vastly different in style and tone to O’Brien’s oeuvre. At Swim-Two-Birds has also been compared to James Joyce, however, O’Nolan was once quoted as saying “I declare to God if I hear that name Joyce one more time I will surely froth at the gob.” It may be that the only thing these authors really have in common is Ireland itself. At Swim-Two-Birds brims with Irish tradition and folklore. Indeed, in many ways it may be the most “Irish” novel anyone –including Joyce- has ever written. The story revolves around a young man attending college who is writing a novel about a man writing a novel. What the college writer and the writer he writes about have most in common is that neither of them seem to be able to get out of bed. Living with his long-suffering uncle while occasionally attending classes and drinking sessions with his friends at various pubs, the unnamed student lets the characters in his novel come to life in order to rival the plot expectations of his somnambulist author/main character. Along the way, we meet the Pooka (remember the movie Harvey with Jimmy Stewart? This is a different type of Pooka!) MacPhellimey, “a member of the devil class,” as well as legendary Mad King Sweeney, and many other colorful folk as three different stories emerge and eventually converge. This is brilliant satire as opposed to parody of traditional mores and literary forms. A master at creating literary conundrums of his own, Jorge Luis Borges said at the time of At Swim-Two-Birds initial publication, “I have enumerated many verbal labyrinths, but none so complex as the recent book by Flann O’Brien.” Full of humor and intelligence, At Swim-Two-Birds is an unforgettable reading experience. [via]