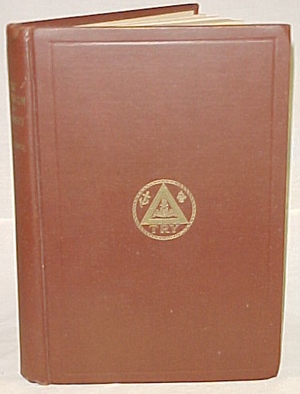 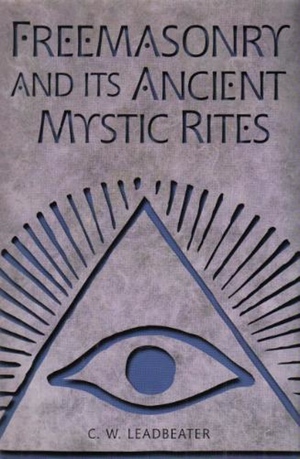 This book is a lot more peculiar than its rather generic Masonic title might suggest. It was written by Theosophist Leadbeater as a sequel to his Hidden Life in Freemasonry. In both that book and this one, he engages the postulate of a secret “Head of all true Freemasons” or H.O.A.T.F., which appears to be a metaphysical doctrine of Theosophical origin. For his references to contemporary Masonic work, Leadbeater focuses on the Theosophical strain of Co-Masonry.

In the first chapter, “Schools of Masonic Thought,” he segregates Masonic historians and theorists into four camps: Authentic, Anthropological, Mystical, and Occult (or Sacramental). These distinctions are drawn clearly and seem useful enough; Leadbeater places himself in the Occult/Sacramental school, and thus concerned with the magic of ceremony, and the development of will and knowledge through ritual.

The author was clearly addressing himself to initiates, as the text presumes a familiarity with Masonic jargon and abbreviations. A reader who doesn’t easily read Installed Master for “I.M.” or know what a “s..n” is will likely be frustrated by the exposition. There is also fairly free use of Theosophical jargon such as “Rays” and “sub-races.”

Possibly the most entertaining section of the book are those chapters dealing with the ancient mysteries: Egyptian, Cretan, Hebrew, Greek, and Mithraic. In all of these, the author sees the perpetuation of an Atlantean tradition of initiatic science, to be taken up in dilute form by Freemasonry. These accounts take into account the latest finds in archaeology in Leadbeater’s day, but they are supplemented with his astral or visionary investigations of history, creating a more colorful (if less credible) story than would be otherwise available.

Later chapters treat in a similar manner the traditions of the medieval stonemasons and the genesis of modern Freemasonry, the development of the Scottish Rite, and the origins of Co-Masonry.

Appendix II is a “Table of Principal Masonic Events from 1717,” which makes a convenient reference for dates, particularly in the development of the Memphis and Mizraim rites and Co-Masonic jurisdictions.

The Gramercy reprint lacks the illustrations of the original edition, which is something of a disappointment when the author references “a number of statuettes and votive figures found in Crete or in the outposts of Minoan civilization, which are represented in such indubitably Masonic attitudes that even the most sceptical student must acknowledge that no chance can explain this similarity.” But the details are not described, and the promised plate is absent. [via]