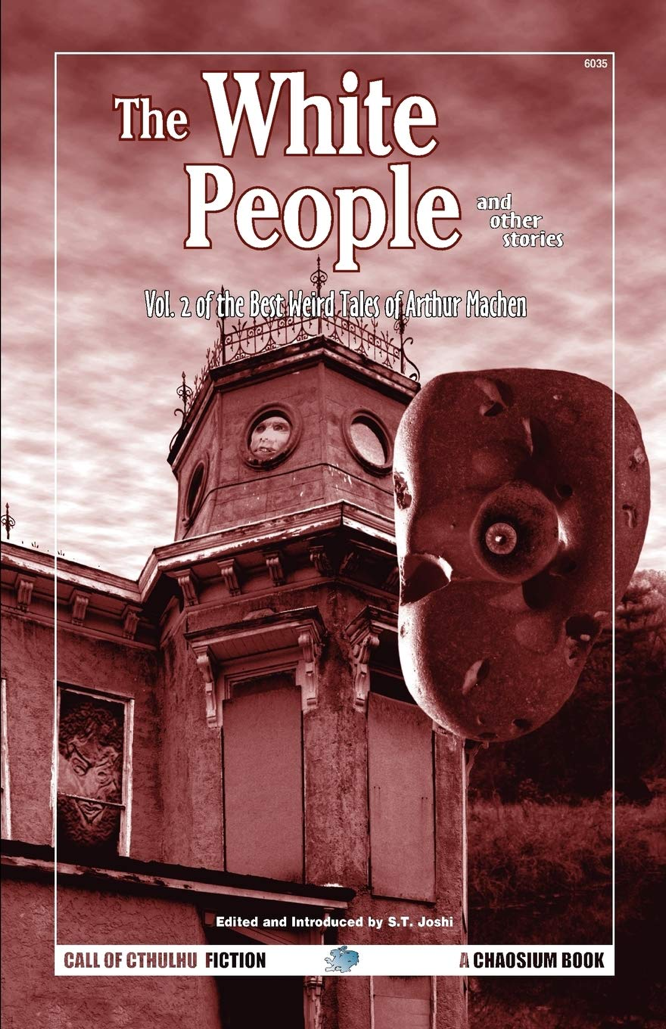 This second book is far more uneven than The Impostors and Other Stories, editor Joshi’s first volume of collected weird Machen. It begins with “The Red Hand,” a story featuring Machen’s old duo Dyson and Phillips, and consistent with his earlier works. After that, it’s off to very different material. The imagistic “Ornaments in Jade” are described by Joshi as “prose-poems,” and whatever the merits of that description, they are wonderful stuff. None of them is more than a few pages long, and they are nearly plotless, but highly evocative.

The lauded story “The White People” caught me quite by surprise. I had been expecting something more along the lines of Machen’s earlier weird work; in fact I worried that it might be something of a re-tread of “The Shining Pyramid” or “The Novel of the Black Seal.” But it turned out to be more like “Ornaments in Jade”: light on plot, and thick with psychotropic sensory detail. One thing that impressed me was its extreme (yet subtle) nesting of narratives: the interlocutors Cotgrave and Ambrose form the outermost story, but the main tale is in the green MS book full of a girl’s personal reminiscences, which themselves include stories, sometimes containing further stories. E.g. the girl’s nurse recounts having been told certain things by her great-grandmother, which then become a story-within-within-within-within-within… This method of dropping through narrative frames is actually a reliable technique for hypnotic induction, and it shouldn’t be surprising that it literally entrances readers, and possibly has an effect on their dreams! Other trance induction methods prominent in “The White People” include chants and nonsense rhymes, physical spinning and dancing, and solitude. The narrative voice of the girl in the story is surprisingly convincing and effective, considering that Machen seems to have shed none of his earlier misogyny. I was struck by this remark from Ambrose early on:

“We should [feel horror in the presence of true evil] if we were natural: children and women feel this horror you speak of, even animals experience it. But with most of us convention and civilization and education have blinded and obscured the natural reason.” (66)

If “The White People” surprised me, “A Fragment of Life” totally bowled me over. Reading this story on its own seemed to give me all the evidence I could want that Machen had actually attained to some sort of mystical adeptship, in order to be able to relate the experiences he attributes to his protagonist Darnell, who at the story’s outset “lived in the grey phantasmal world, akin to death, that has somehow, with most of us, made good its claim to be called life.” (121)

The wartime fantasies of The Angels of Mons (including “The Bowmen”) had slight literary merit in their own right. But their inclusion was totally necessary because of the odd reflexive impact that the accidental hoax of the “angels” had on Machen’s work as a writer. (People who believed the “urban legend” generated by Machen’s story strongly resisted his attempts to deflate it.) In all of his subsequent fiction, the authorial voice of the fantasist is strangely knotted up with the conscientious journalist. This syndrome is especially apparent in “The Great Return,” but that 1915 story was most interesting to me for its precocious deployment of mescaline effects as a device to explain mystical states (223-224). The brief “Out of the Earth” is in many ways a recreation of Machen’s earlier “The Shining Pyramid,” but in the style of the new, war-era Machen, while “The Coming of the Terror” manages to foster quite an aura of mystery and terror, but lacks the sense of numinous wonder that brings me back to Machen’s work. “The Happy Children” contains elements of “The Great Return” packed into the brief fictional legend format of the stories from The Angels of Mons.

So, while the war-era works were worth reading, they didn’t impress me deeply. But “The White People” and “A Fragment of Life” cemented for me Machen’s status as a literary exponent of true esoteric initiation. 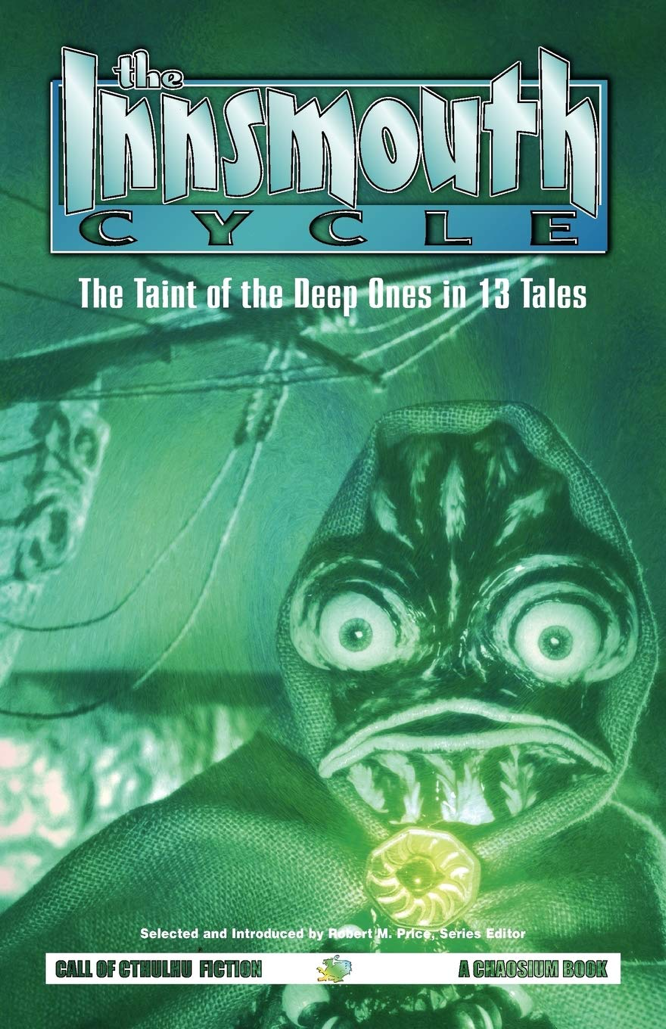 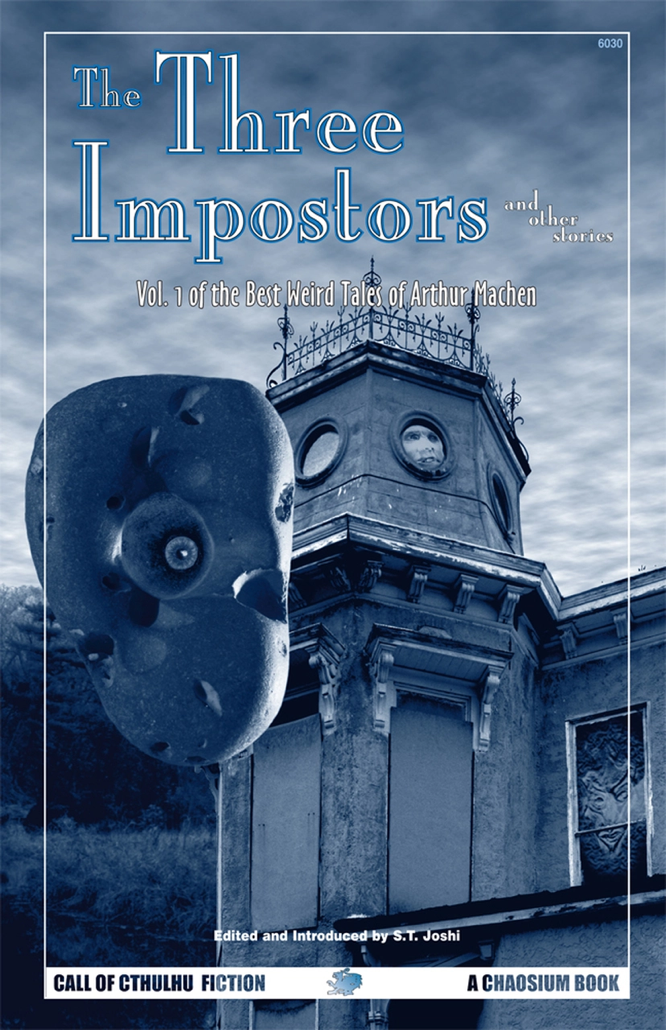 This volume contains Machen’s first published story, the notorious yellow-nineties fright “The Great God Pan,” accompanied by “The Inmost Light” with which it was published in its original book form, as well as the short story “The Shining Pyramid” and the full novel The Three Impostors. This last is often cannibalized for its fine component stories, such as “The Novel of the Black Seal.” Overall, the whole collection is a pleasure to read for those whose tastes run to the uncanny and the quietly twisted.

“The Great God Pan” is indispensable for its influence on later writers, including Lovecraft (“The Dunwich Horror”), King (“N”), and Straub (Ghost Story), and — as is actually fairly typical of 19th-century horror literature (think of Frankenstein or The Strange Case of Dr. Jekyll & Mr. Hyde) — it uses a science-fictional innovation to touch off a series of frightful events. In this case, it is brain surgery. “The great god Pan is dead!” has been supposed by centuries of Plutarch’s readers to have meant that the resurrection of Christ was the death-knell of Hellenistic paganism. The identity of horned Pan with the Christian devil is nearly explicit in Machen’s story, with the additional wrinkle that this inhuman evil is a reality against which we are shielded by a little bit of neuroanatomy!

There are two interesting observations to be made about name of the outre femme fatale Helen Vaughan. Helena was the name of the partner of the seminal Gnostic sorcerer/heresiarch Simon Magus, so Helen is a fittingly allusive name for what is really a sort of antichrist figure who reverses the action of Christian salvation. To have her mother — raped by Pan/Satan — named “Mary” is a nice touch. Vaughan seems to have been a name that Machen liked. He uses it again for an unrelated male character in “The Shining Pyramid,” where its Welsh provenance ties in to the setting. It is evocative of the 17th-century Rosicrucian alchemist Thomas Vaughan, and in his invention of Helen Vaughan, Machen may have been a contributor to the later character Diana Vaughan, the high priestess of the alleged Luciferian sex-and-black-magic cult of the Palladium that controlled worldwide Freemasonry, all manner of occult societies, and even major non-Christian religions, according to the conspiracy-monger Leo Taxil. It is entirely in keeping with the perversity of Taxil’s enterprise that he would take the name Vaughan from Machen’s fiction.

There is a decided vein of misogyny running through the stories in this book, paired with a horror of sex that is positively stunning. Despite these Victorian failings, Machen really delivers a sense of the supernatural, expressing the philosophical position that he puts in the mouth of one of his characters: “I have told you I was of sceptical habit; but though I understood little or nothing, I began to dread, vainly proposing to myself the iterated dogmas of science that all life is material, and that in the system of things there is no undiscovered land, even beyond the remotest stars, where the supernatural can find a footing. Yet there struck in on this the thought that matter is as really awful and unknown as spirit, that science itself but dallies on the threshold, scarcely gaining more than a glimpse of the wonders of the inner place.” (154-155)

Many of the characters are medical doctors or authors. The former help to brighten the line between the quotidian and the monstrous, while the latter serve as speakers and foils for Machen’s aesthetic agenda. “[P]erhaps you are aware that no Carthusian monk can emulate the cloistral seclusion in which a realistic novelist secludes himself. It is his way of observing human nature,” (195) jibes the writer Dyson, a continuing protagonist of several of the stories in this volume.

Machen (like Dyson) was certainly no realist. His fiction is abundantly open to the charge that the plots rest on coincidental events of such improbability as to remove them entirely from the believable. And yet, they hold together if the reader is led to infer some fatalistic, supernatural influence driving the experiences of the protagonists. “The whole universe, my friend, is a tremendous sacrament; a mystic, ineffable force and energy, veiled by an outward form of matter; and man, and the sun and the other stars, and the flower of the grass, and the crystal in the test-tube, are each and every one as spiritual, as material, and subject to an inner working.” (209)