Julianus reviews Painted Black: The Chilling True Story of the Wave of Violence Sweeping Through Our Hometowns by Carl Raschke in the Bkwyrm archive. 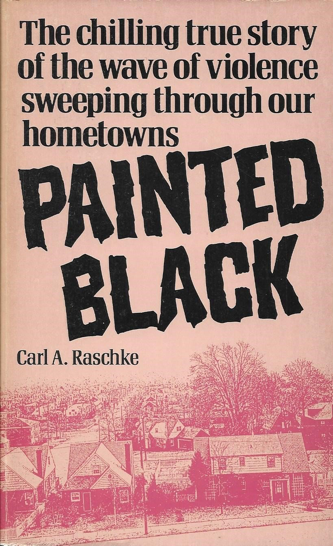 This book promises to to relate “from drug killings to heavy metal– the alarming true story of how Satanism is terrorizing our communities.” What it actually is an error-ridden compendium of all the usual conservative Christian Fundamentalist hysteria. Raschke seems incapable of getting his facts right; I understand that when Painted Black was first published one reviewer tried making a list of all the errors of fact and gave up after his list reached 50 typed pages. This is not the calibre of research you would expect from a college professor, which Raschke is, or was when he wrote this slop. I wouldn’t be surprised if he got his tenure revoked for gross incompetence. Mind you, there is plenty of unintentional humour in here and the chapter on “Fantasy Role-Playing Games and the Devil’s Bargain” is just plain hilarious.

The book does have some nice pictures, including three of a “recent satanic ritual.” Problem is that they aren’t: at top is a Gnostic Mass altar, below is a fellow doing the Mass of the Phoenix, and at bottom you see several people doing the very un-satanic Golden Dawn Neophyte Ritual. How can I be so sure of this, you ask? Easy: I’m the long-haired person on the far right.