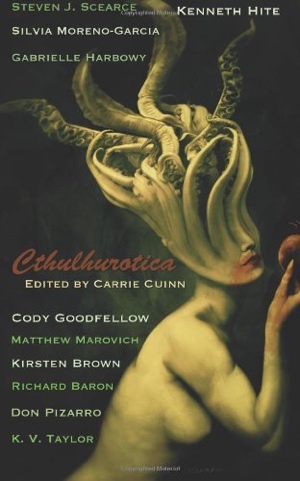 This collection of Yog-Sothothery has some stories with the sort of explicit sex the title might suggest, but in others, the authors simply offer stories of the “Mythos” where sex is not thoroughly ignored (in contrast to Lovecraft’s originals)! The vein most represented here is the Deep Ones lore of “The Shadow Over Innsmouth” (in stories such as “The C-Word,” “Transfigured Night,” “The Fishwives of Sean Brolly,” and “The Assistant from Innsmouth”), although of course stories inspired by “The Dunwich Horror” are not in short supply either, and there is a considerable variety overall. The one jauniste tale (“Flash Frame”) was unsurprisingly one of my favorites, but there were a lot of good stories throughout

Short fiction is not the entirety of the contents, though. There are black-and-white drawings illustrating many of the stories, mostly by artist Galen Dara, who shows some real versatility as well. There also three pieces of criticism at the end of the book, each of which has its merits. The first of them addresses the proliferation of Yog-Sothothery generally, the second anatomizes the erotic potentials of the Lovecraftian weird, and the third applies scholarly tools of genre and trope criticism to the actual fiction in the book. Also there are a couple of poems: Lovecraft’s “Astrophobos” is excerpted at the start and finish of the story collection, and the anonymous “Victim of Victims” is a filking of “Fiddler on the Roof” which really isn’t worthy of the rest of the volume. [via]