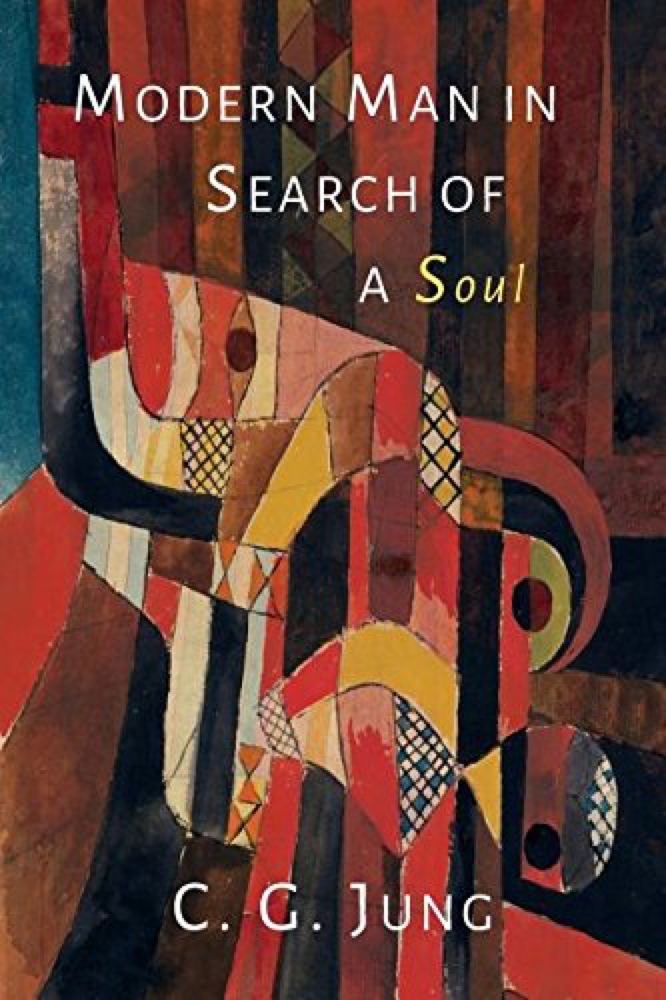 Modern Man in Search of a Soul collects ten lectures on psychotherapy, cultural mentalities, and religion, given by Jung in the late inter-war period. They were translated into English by Baynes in 1933 and supplemented with an essay by Jung on the distinctions between his psychology and that of Freud. My copy is a Harvest/HBJ mass-market paperback that I can easily imagine littering college campuses in the 1960s.

Jung says,”To the psyche, the spirit is no less the spirit even though it be called sexuality” (73), and in this point he seems to be opposing the Freudian focus on “sexuality” to Jung’s own preference for construing issues in terms of “spirit.” The key subtext here, however, is the critical identity and continuity between spiritual and sexual phenomena. Since Jung avoids mentioning sex at least as often as Freud insists upon it, this continuity is useful to keep in mind when reading either thinker.

Although I have been accustomed to seeing Jung as the primary representative of the “right wing” of the psychoanalytic tradition (contrasted with Reich and Marcuse on the left), there are passages here which prompt me to suspend that judgment. For example he declares, “My aim is to bring about a psychic state in which my patient begins to experiment with his own nature–a state of fluidity, change and growth, in which there is no longer anything eternally fixed and hopelessly petrified” (66). Thus Jung identifies his therapeutic goal with the loosening of character, and the subjection of identity to a changeable individual will.

In the lecture “The Stages of Life,” Jung presents a theory of climacteric personal development. Very significantly he uses a solar metaphor identifying birth with dawn and death with sunset. He also remarks–with particular reference to his patients–that 20th-century Western culture suffers a poverty of institutions capable of psychically orienting individuals to the “afternoon” of life, and claims that “Our religions were always such schools in the past” (109). In this last point, I think he errs. Religions have always had a much wider range of functions, and it is in particular the orders of initiation (most often embedded in religious contexts) that supplied the desideratum.

The individual passage of the book that made the most striking impression on me was in “The Basic Postulates of Analytical Psychology,” where I take Jung to be painting an eloquent picture of what Eliphas Levi called The Baphomet of Mendes, a pantheistic and magical figure of the absolute: “If it were permissible to personify the unconscious, we might call it a collective human being combining the characteristics of both sexes, transcending youth and age, birth and death, and, from having at his command a human experience of one or two million years, almost immortal. If such a being existed, he would be exalted above all temporal change … he would be a dreamer of age-old dreams and, owing to his immeasurable experience, he would be an incomparable prognosticator. He would have lived countless times over the life of the individual, of the family, tribe and people, and he would possess the living sense of the rhythm of growth, flowering, and decay” (186).

Lectures of less esoteric interest include “Aims of Psychotherapy,” which elaborates a context in which to situate Freudian, Adlerian, and Jungian approaches to the discipline, as well as “A Psychological Theory of Types,” which expands Jung’s introversion/extraversion polarity with the two additional dimensions of thinking/feeling and sensation/intuition, but without the perception/judging axis that would complete them in the now-ubiquitous MBTI. The lecture “Psychology and Literature” focuses on visionary literature, and is thus actually more concerned with spiritual states and phenomena than literary production as such. It even touches on one of my particular favorite works in this vein, the Hypnerotomachia Poliphili (157, 166).

The book’s final two chapters stand out for Jung’s discussion of religion as a barometer of collective spiritual states. In “The Spiritual Problem of Modern Man” he discusses the “deep affinity with Gnosticism” expressed by contemporary religion, and he also treats at length the extent to which the “repellent” strains of occultism, Theosophy, and imported Oriental mysticisms both demonstrate the obsolescence of established religious forms and may serve as the seedbeds for their successors. “Psychotherapists or the Clergy?” treats the conundrum of secular psychotherapists being preferred to clergy by clients whose actual demand is for what traditionally would have been considered spiritual direction. [via]