The Contrarian’s studio was burglarized

Casey Rae-Hunter, who you will probably more readily recognize as Hermetic Library anthology artist The Contrarian, has had his studio burglarized! Casey was thrown for a multiple month spiral, but is now running a crowdfunding effort to get back on his feet, which you may want to support, and is offering a bunch of reward for supporters that may be of interest as well.

“Lux Eterna Records is an art-rock and experimental label based in Washington, DC. It is the music wing ofThe Contrarian Media, a hydra-headed media empire of some repute. Lux Eterna has put out dozens of well-received records over the years, most of which were lovingly assembled at Sounds of the Baskerville Studios in Washington D.C.

Some months ago, Lux HQ was burglarized and the rat bastards made off with a bunch of studio equipment, including our main computer, associated software, microphones and sundry. Since then, we’ve been unable to provide the top-notch musical entertainments for which Lux is known.

This sucks. But you can take a sad song and make it better (na-na-na-na, hey, dudes)!

It Ain’t Even a Lot We’re Asking, I Mean, Jeez

We’re a fat-free, farm-fresh, free-range, friendly-feels enterprise. Your contributions will be used to do what we were put on this planet to do: create quality music and help our artist pals do the same. Look, it’s not like we’re gonna blow our money on frivolities like gourmet cat food and vintage monster figures (though it’s tempting).

More specifically, we are seeking funds to acquire the following:

· A replacement production computer with a few bells and whistles like expanded RAM and an on/off switch (Apple’s got us by the what-have-you)
· Replacement software (lemons-to-lemonade: we were due for a ProTools upgrade anyway, but there’s also a bunch of plug-ins that we lost)
· New microphones (this is the real bummer, but we’ve got an eye on a couple that are inexpensive but still decent)

The rent is too damn high! Nobody makes money from music! The crops have failed and the cattle have gone dry! It’s tough out there for everyone—especially a teensy label/studio that got ripped off by nogoodniks. This is your chance to right a moral wrong and help proudly independent music-makers back on their feet.

We are a small business. Our studio literally takes up less space than some people’s shoe collections. We work really hard on everything we put out. There is no chaff in our enterprise whatsoever. Your investment is proportionally important. Every dollar contributed to this campaign will be used to bring independent art forward.

We understand that not everyone is able to fund our work. If you like our music, or even if you don’t like our music but think that what we offer is important anyway, please tell your friends about us (ideally using the Indiegogo sharing tools, to make it easier for them to support us).”

Video for “Dusk Latitudes” by The Contrarian from Eldritch Musicks

Video for “Crimson Village” by The Contrarian from Eldritch Musicks

Advanced Magick for Beginners is a new album from Hermetic Library artist The Contrarian, Casey Rae-Hunter, and now available as a pay “what thou wilt” download, with or without extras. You can also preview the entire album, as well has his previous releases, via Lux Eterna’s Music page. 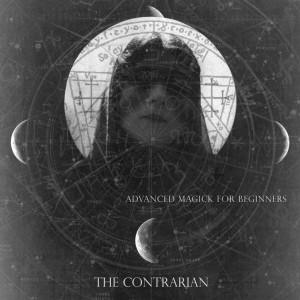 “It’s finally here: the new full-length from The Contrarian, Advanced Magick for Beginners. The most personal Contrarian album to date, Advanced Magick boasts a broad musical palette and revealing lyrics. From the electric eden of ’60s Great Britain to American stoner sludge, this aural headtrip proves once again that The Contrarian is your overlord.

The record is available in three “Pay What Thou Wilt” packages, starting with an absolutely FREE 11-track digital download. But you might want the Advanced Magick III bundle, which comes with a rare, before-the-camera appearance by The Contrarian speaking candidly about what it took to make this record a reality. Trust us, this is as emo as the dude gets.” [via]

“The Magician” is a limited-time exclusive from the upcoming album Arjuna, by The Contrarian. The song, like all on this record, deals with the Metaphysical Masculine in times of strife or opposition. This track is an attempt to reflect the qualities of the Magician tarot card, in both a literal depiction of its symbolic qualities, and a more hermetic transmission of its subtle ones — including, but not limited to – the material and spiritual challenges of attainment. It celebrates any spur to action through the ongoing investigation of wisdom techniques.

“The Magician” was composed, performed and recorded by Casey Rae-Hunter at Sounds of the Baskerville studios in Washington, DC. Casey’s magazine, also called The Contrarian, can be found at

His record label, Lux Eterna Records, can be found at

The Magician by The Contrarian

Walk the path, scrutinize the signs
Read the text, see between the lines

The full track list for this inaugural anthology album consists of 15 tracks by 15 artists, 66 minutes of fantastic music:

The Hermetic Library at Hermetic.com has an overall vision of Archiving, Engaging and Encouraging the living Western Esoteric Tradition. This is an anthology album of tracks by artists inspired by or who incorporate ritual and magick in their work. This anthology album will help promote artists to the audience of the Hermetic Library and beyond. It will also further raise awareness about the connection between magick, music, and ritual.

Over the last year, as a project of the library, I have created a group at SoundCloud, the Hermetic Library audio pool, for tracks and artists inspired by or manifesting the Western Esoteric Tradition. With this group I’ve been working to raise awareness that music and performance can be a form of ritual and magick. This has been a space for artists to share their music and other audio, as well as connecting artists who feel drawn to these topics and ideas, or, especially, incorporate and manifest ritual and magick in their works with other artists and a larger audience.

Additionally, this album is being released on the birthday of hermetic.com which was Dec 3, 1996. This release date marks the Hermetic Library’s 15th year in existence.