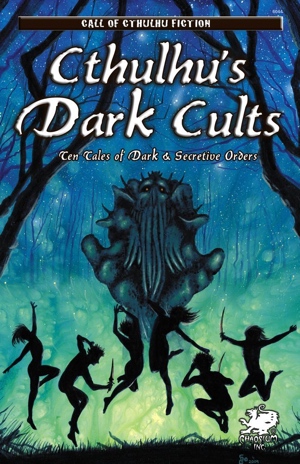 More than most of the Chaosium “Call of Cthulhu Fiction” volumes I’ve read, this one is tied down to the pulp-era setting of the Call of Cthulhu role-playing game. The tales share a common emphasis on the presence of cults dedicated to the praeternatural entities of Yog-Sothothery. There is a fair amount of variety among the contributions, and some of them are genuinely disturbing.

Many of these stories use ethnicity and “race” as a distinction in order to foster fear by “othering” the cultists. Every central protagonist, without exception, is white (although there are a couple of darker-hued sidekicks), and villainous cults include Arabs, Chinese, tribal Africans, etc. As if uneasy with this feature himself, Editor David Conyers makes an apology for it in his forward, mentioning that it follows from the culture of the period in which the stories are set. Still, the argument falls flat with me. To recognize and illustrate the racism of the period does not mean that fantasy horror narratives need to validate it in the way that these do.

My favorite story in the book, which did not partake of this particular fault, was Penelope Love’s “The Whisperer of Ancient Secrets.” Conyers supplies the final story of the volume, in which he explicitly ties together most of others into a single continuity. I was impressed with how artfully he pulled that off. [via]