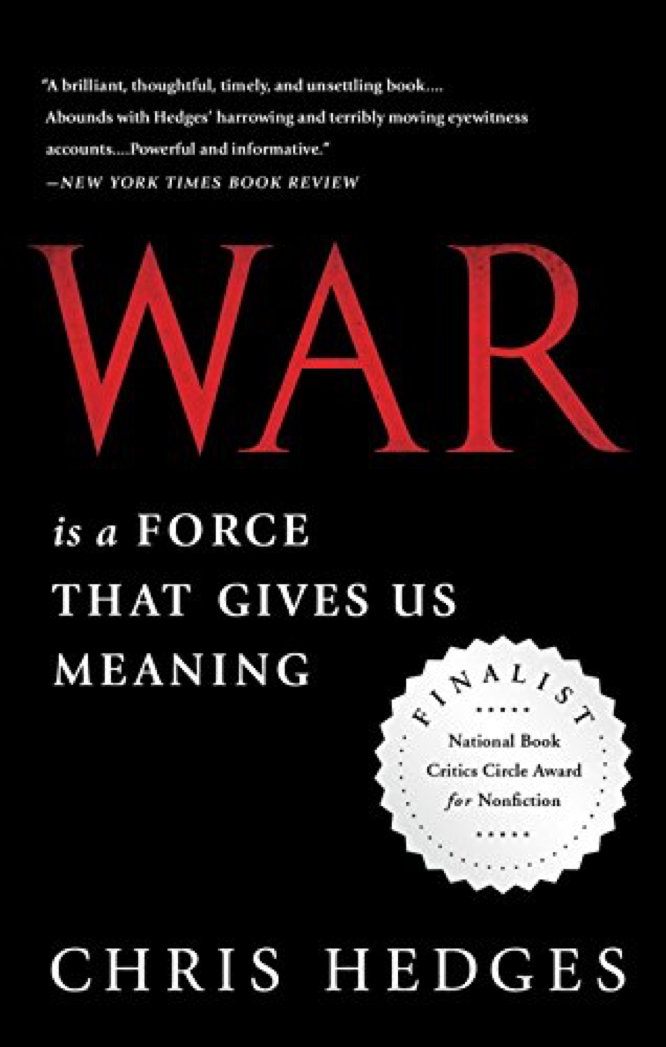 Chris Hedges wrote War Is a Force That Gives Us Meaning after the events of September 2001, but before the Afghanistan and Iraq wars of the 21st century that make it all the more painful to read today. About two thirds of the text is memoir, but in the form of anecdotes pressed into service for a war correspondent’s reflections about the perennial nature of war and what it does to societies and individuals. Many of these stories are grueling to read, and Hedges very consciously straddles a line on which he hopes to make patent the attractions of war without himself glamorizing it.

There are many literary references in this book, especially to the classics of antiquity which Hedges studied at Harvard during a hiatus in his work as a journalist. He gives these their due as evidence of the enduring attributes of war, but he avoids elevating them into sanction for it. He also returns at various points to his own need for literary sustenance in the midst of war (e.g. 90, 169).

In his introduction, Hedges disclaims a pacifist agenda. He writes that his aim is “a call for repentance” in the face of growing US military hubris. The book is concerned with the ways in which war is fostered by the dehumanizing falsehoods of nationalism, destroying culture and erecting an abstract “cause” to which life must be subordinated. Hedges proposes memory and love as the antidotes to the martial impulse, where these are rooted in lived contact with others, particularly across ethnic and religious divides. Unfortunately, this book is as timely now as when it was first published, and there is no real likelihood that it will become irrelevant in the foreseeable human future.