Jeffrey S Kupperman reviews Three Books of Golden Dawn Tarot in Divination, Vol 1 No 4, from the archive of Journal of the Western Mystery Tradition. 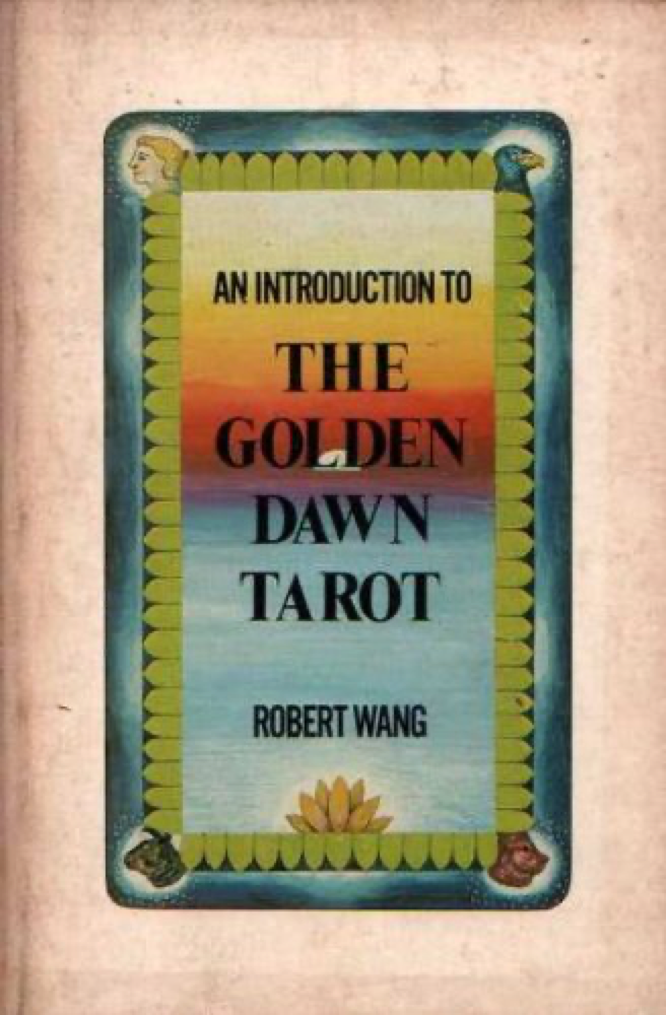 First published in 1978, An Introduction to the Golden Dawn Tarot was the first book available that discussed solely the tarot as conceived by the Hermetic Order of the Golden Dawn (GD). Now students of the works of Israel Regardie, who had a great deal of input to both this book and its corresponding “Golden Dawn Tarot” deck had a quick reference manual for all of “Book T”. “Book T” also appears in the Complete Golden Dawn System of Magic and the Golden Dawn, however neither of these works are known for their easy indexing.

An Introduction contains more than just the raw tables of “Book T”. The first 51 pages of this small book discusses several topics anent the history surrounding the Golden Dawn tarot. For instance decks produced by various members of the GD are mentioned as well as how and often why they differ from the GD manuscripts. There is also a section talking about the differences between “exoteric” and “esoteric” tarot decks. More importantly, at least from the practicing magician’s point of view, there is a discussion on how the tarot can be used in ritual and for skrying.

The majority of the book contains the information from “Book T”, which includes not only the tarot descriptions and their meanings but also associated astrological information and the complex tarot reading known as the Opening by Key. Also included in this work is a paper by Mrs. Felkin, the wife of the Chief of the New Zealand Smaragdum Thalasses, an offshoot of the original GD after its schism. The book concludes with A.E. Waite’s “Ten Card Method of Tarot – Divination”, originally published in his Pictorial Key to the Tarot and a two page recommended reading list.

Perhaps the only thing that is disappointing about An Introduction to the Golden Dawn Tarot is the tarot deck that Dr. Wang produced to go with it. While the deck is accurate to the imagery of the Golden Dawn documents the illustration and color work are lacking in brightness, making the deck appear dull and faded. From the perspective of the GD’s color theory this will cause the tarot images to be less useful tools than they otherwise could be. From an aesthetic perspective the deck fails to compare with decks such as the Thoth deck designed by Aleister Crowley and painted by Lady Frieda Harris or Sandra Tabatha Cicero’s New Golden Dawn Ritual Tarot Deck (discussed below). 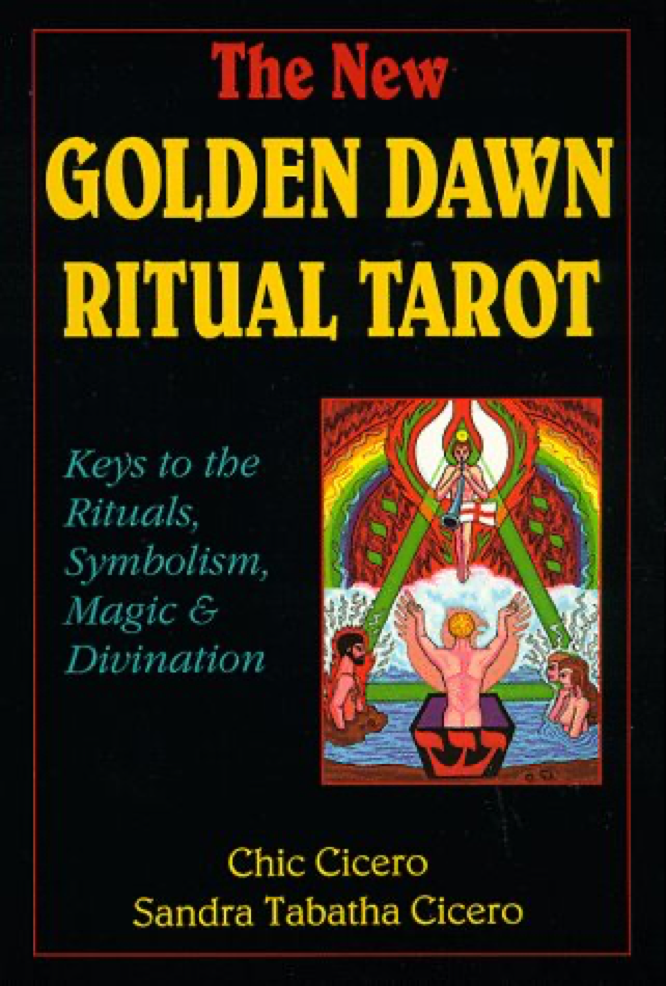 The New Golden Dawn Ritual Tarot, like An Introduction contains all of the material in “Book T” (minus the paper on the tarot projected into a sphere, which is also missing from Wang), though some of it has been rewritten in modern language. However, the tarot card descriptions go beyond the simple one or two paragraphs of “Book T” to discuss each card more in-depth. The only criticism of this is that these added descriptions seem to apply mostly to the newer designs developed by Mrs. Cicero and do not always apply to the GD tarot as a whole, though the creative student should have little problem in extrapolating from one deck to another or adding the new symbolism to his or her catalog of symbols.

This book also contains over 70 pages dedicated solely to ritual work and divination. Unlike in Wang, which aside from the Opening by Key only discusses ritual work in theory, the Ciceros give examples of rituals, divination and skrying techniques as well as the complete rubric for performing them. The book ends with a page on the 32 paths of wisdom, a later annotation to the Jewish Kabbalistic work the Sefer Yetzirah and a good sized bibliography.

Along with The New Golden Dawn Ritual Tarot there is a New Golden Dawn Ritual Tarot Deck, designed and painted by Sandra Tabatha Cicero. This deck contrasts drastically from the Wang deck. Its colors are bright and vibrant and for the first time in a Golden Dawn deck the flashing colors are used. These aspects add to the overall usability of the deck for magical work. However the artwork of the deck is very stylistic, almost cartoon-ish, in nature and may not be to everyone’s liking. 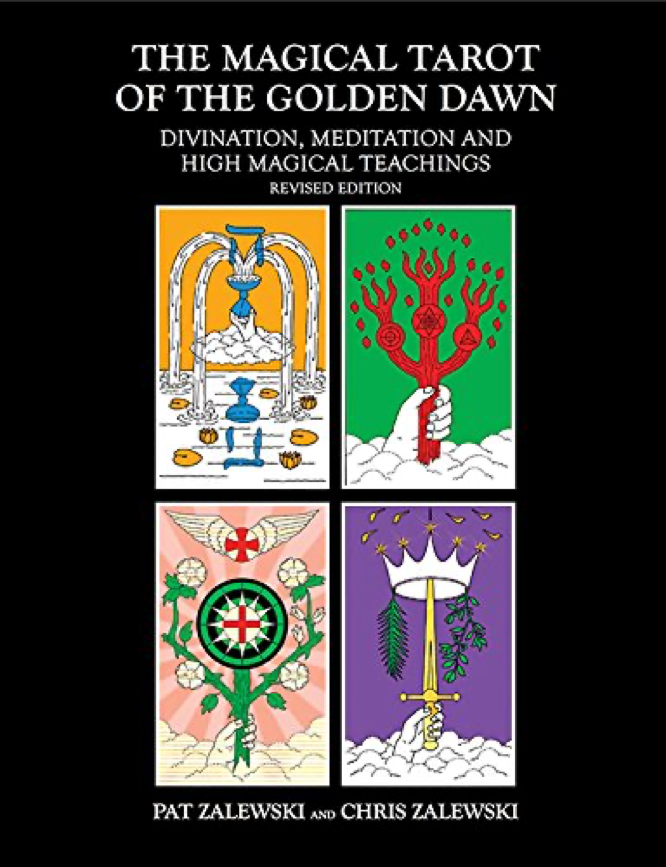 Published originally in 1997 but not released until several years later, The Magical Tarot of the Golden Dawn is possibly the most impressive of the Golden Dawn tarot books. This book is a massive volume, almost 400 pages in length on A4 size paper. Like the previous books this one discusses all of the material in “Book T” (including a re-written tarot and the celestial sphere paper). It also goes beyond the published GD documents in its treatment of the cards, however it does so in a traditional manner. Instead of creating a new version of the Golden Dawn tarot, the Zalewskis recreate a version of the original deck, even using images from the Smaragdum Thalasses’s original tarot deck.

The tarot card descriptions within The Magical Tarot of the Golden Dawn go far beyond the original descriptions and are often two to three pages in length. These descriptions include previously unpublished material from both S. L. MacGregor Mathers and various members of the Smaragdum Thalasses’s Ware Ra temple. Like in the Cicero’s book a great deal of research has been done into the history of the GD tarot and the tarot in general. There is a great deal of new information developed by the Zalewskis as well, as their discussion of the cards on an alchemical level or from the point of view of both spiritual evolution and involution.

Another new feature to this book is the discussion of color and how the GD tarot was traditionally supposed to be colored. According to the Zalewskis, they have published for the first time the correct Golden Dawn method for card coloring, which is apparently closer to that used in Crowley’s Thoth deck than in any other Golden Dawn based tarot. Along with this is a printing of the four color scales as used by Ware Ra, which different in numerous respects to those which have been printed by both Regardie and Crowley. The final 80 or so pages discuss numerous tarot spreads, including the Opening by Key, tarot skrying and meditation, and the re-written Golden Dawn paper entitled “Celestial Tarot”. The tarot spreads include some spreads which are the creation of the Zalewski and the section on mediation and skrying includes what can only be called “tarot poems” for each of the Trump Cards. Two methods for skrying are given in full as well as several examples of skryings already performed. The final section, “Celestial Tarot” contains reworked diagrams by Chris Zalewski. Unfortunately there is no bibliography, though many of the books used for researched are mentioned in the extensive footnotes.

There are two or three critiques to be made about The Magical Tarot of the Golden Dawn. The first of which is that, it being a work of self-publication, the binding method is worse than usual bookbindings. The comb binding used is inadequate for the size of the book causing the outside pages to tear. As mentioned there is no bibliography but there is also no index for cross-referencing. Finally there is not as yet a tarot deck to accompany this book, though according to Mr. Zalewski one being painted by Skip Dudchus is nearly finished. 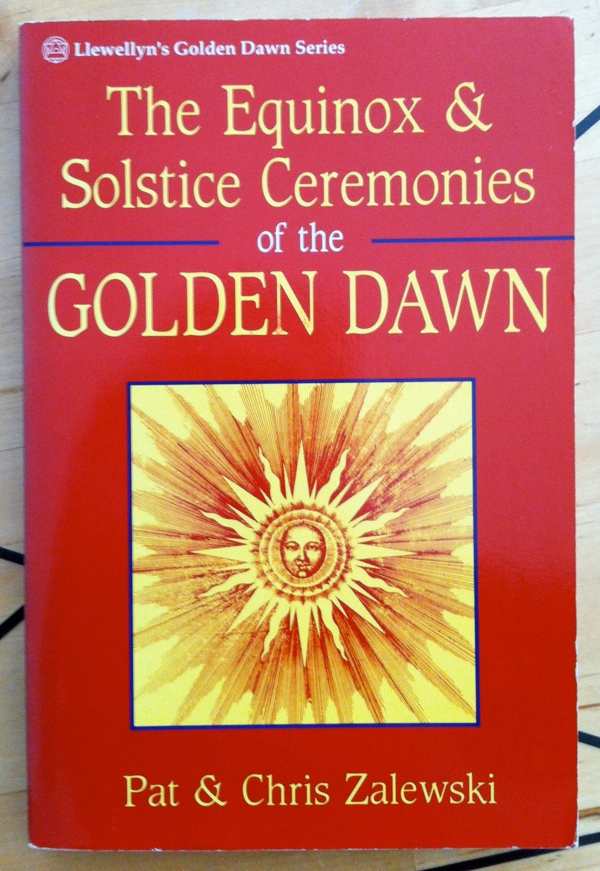 Enochian Chess of the Golden Dawn: A Four-Handed Chess Game by Chris Zalewski is part of the collection at the Reading Room. 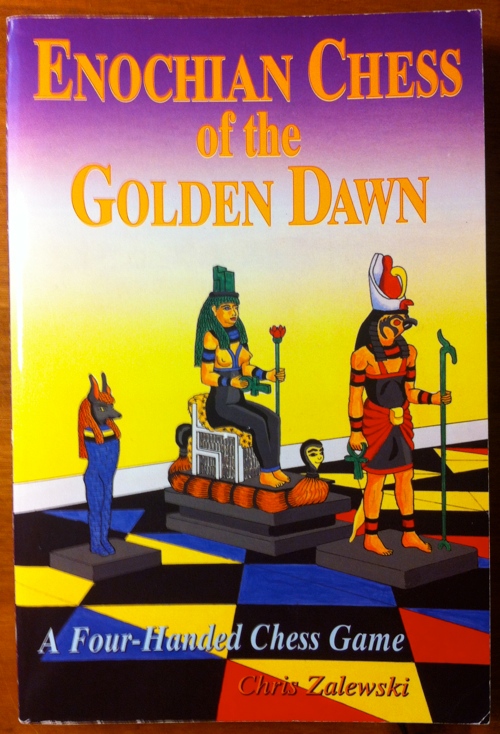