Hermetic Library Fellow T Polyphilus reviews Civilization and Its Discontents by Sigmund Freud, with an introduction by Christopher Hitchens. 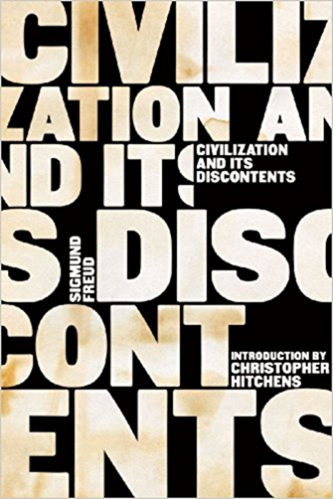 Civilization and Its Discontents presents itself as a direct sequel to Freud’s Future of an Illusion. Where the earlier text was chiefly concerned with the irrational adherence to religious ideas, this one starts out inquiring into the “deepest sources of religious feeling” (9), what might in more sympathetic hands be termed the psychology of mysticism. In section II of the essay, Freud at first tries to relate such sources to the chief means of palliating life’s suffering: i.e. “powerful diversions of interest, … substitutive gratifications, … and intoxicating substances” (10), which three may be taken as another iteration of the chief Platonic frenzies (dropping the Muses as was done by Ficino and his successors): oracular, erotic, and mantic. (In the writings of Aleister Crowley these become the musical, sexual, and pharmaceutical methods of inspiring ecstasy.) At the end of this section, Freud seems to imply that a chief function of religion is to guard against the abusive individual indulgence in the frenzies, and to supply a deferred substitute in the form of metaphysical guarantees. (As Crowley wrote, “No religion has failed hitherto by not promising enough; the present breaking up of all religions is due to the fact that people have asked to see the securities.”)

In the third of the essay’s eight sections, Freud pivots to concentrate on the business indicated by its title. He begins to explore the tensions between individual gratification on one hand and social growth and welfare on the other. In particular, he focuses at first on the occasional hostility toward cultural development as such, and the idealization of a pre-lapsarian state. As the discussion continues on to the etiology of culture generally, it becomes distinctly androcentric (“Women represent the interests of the family and sexual life; the work of civilization has become more and more men’s business,” 33) and culminates with a presentation of 1930s family life and sexual discipline that seems positively Victorian in the most pejorative sense of the term.

Returning to religion, Freud identifies the social instrumentality of the religious “love of neighbor,” as well as the insupportable demands that it makes of individuals. This context is the one in which he develops an outline of the conflict between Eros and Thanatos, the life-instinct and the death-instinct. The instinctual bind is what he then hypothesizes as the motive force in the development of the super-ego (i.e. conscience) in the individual.

In the closing passages, the idea of the super-ego of a community or of “an epoch of civilization” is introduced, and Freud proposes that such super-egos take their particular forms in reaction to perceived human figures, such as Jesus bestowing the “love of neighbor” fixation on the collective super-ego of Christian culture. The possibility to personify such a collective psychic function makes it provocatively similar to the “Aeon” as used in Thelemic parlance, especially when Freud posits the derangement and replacement of such a super-ego. And in this final section, while disclaiming “any opinion regarding the value of human civilization” (70), he does seem to come full circle to the critique of culture, suggesting that the survival of humanity itself may be dependent on the arrival at a new covenant between Eros and Thanatos at the collective level. [via]