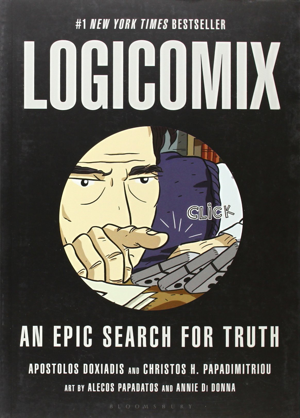 Logicomix is a genre-defying graphic novel, a metafictional (the authors insist on the logical term “self-referential”) biography of the logician Bertrand Russell, bringing him face-to-face with other champions and challengers of logic in the first half of the 20th century–whether they really met or not. A recurrent conundrum presents the close relationship between madness and the discipline of logic, and putting Russell’s account into a speech that he gave in the US in 1939 places the essential questions in the context of decisions about war and peace. A 21st-century frame story is set in Athens, thus alluding to the ancient foundations of logical thought, as well as the dramatic form of tragedy, to which author Doxiadis (but not Papadimitriou) refers Russell’s saga.

As the authors are at pains to point out, this book is not a primer on logic in comic form, nor is it really about logic as such. It is about the people who are driven to pursue this line of inquiry, and the stresses and rewards involved with it. At the same time, the story can and should be inspirational to anyone who might want to look into the discipline. I was a little disappointed that the apparent dead-end of Gödel’s incompleteness theorem was allowed to stand as a terminus of axiomatic logic as a whole, with only the algorithmic enterprises of Turing and Von Neumann as a coda. As a fan of G. Spencer-Brown’s Laws of Form, I know that the trail didn’t end there, and I would have relished some other pointers. But to give the authors their due, they did accomplish their stated goal to tell a story with a beginning, middle, and end–even if the end was “incompleteness.” (Contrast a story that was complete at endlessness.) And they did a good job of it too.

Considering how much of the story necessarily takes place in speech — both to communicate abstractions, and because the two chief framing devices are conversation and lecture — there is really a lot to look at in this book. The artists have rendered all of the historical figures and situations in a streamlined but serious style that amplifies all of the emotional coloration involved with the tale. The book reads amazingly quickly: it’s a fat tome, but if you’re a reader like me, it will be over far too quickly, forcing you to look for a dissimilar sequel in something like Gödel’s Proof or Fuller’s Critical Path. [via]