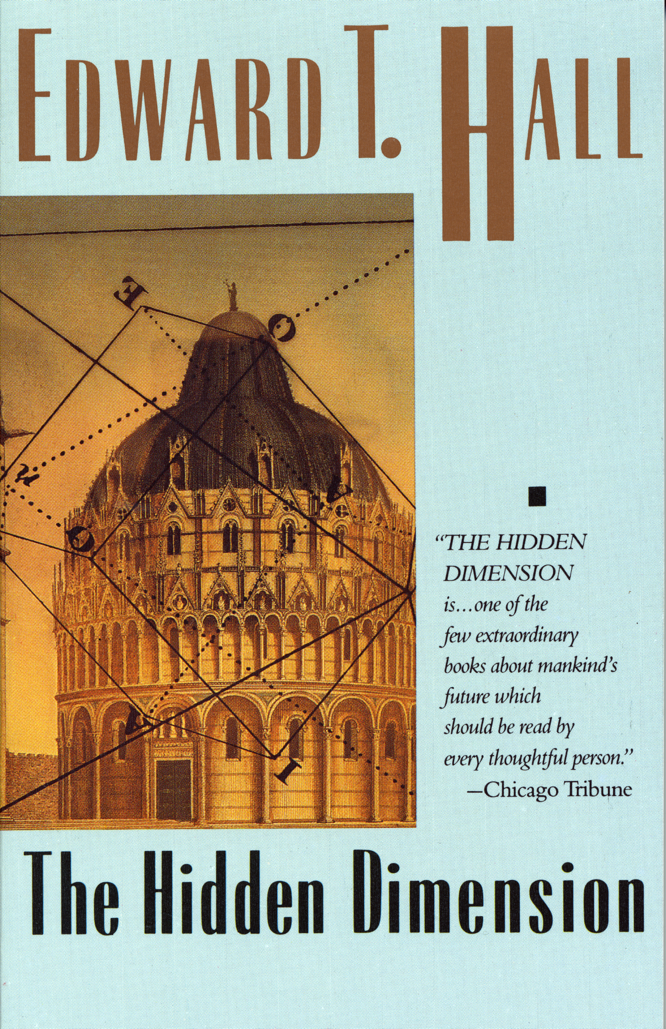 The Hidden Dimension is, among other things, cutting-edge theory of multiculturalism … for 1969. Author Edward T. Hall was, as well as an anthropologist with an expressed interest in city planning, also an adroit neologist. His coinages in this volume include: proxemics for the study of interpersonal distances and personal space, infraculture for the unconscious perceptual conventions on which culture is erected, and the self-explanatory term pair sociopetal / sociofugal to characterize the dynamics of spatial factors and arrangements.

I was interested in this preliminary overview of nascent proxemic science for my own purposes as a performing liturgist (i.e. designer and executor of ceremonial ritual). The core chapters of the book (IV-X out of XIV total) do in fact have useful information and ideas toward that end: in particular, the correlation of different sensory qualities and capacities with different distances. Chapters XI and XII provide cross-cultural comparisons and contrasts that substantiate the idea of benchmarking ceremonies to national standards–even in an international organization dedicated to the principle of universal brotherhood.

The concerns of the author, however, revolve around quotidian life and labor. While some of his remarks about “the American Negro” and the “Spanish American” populations are painfully dated with respect to their language and assumptions, this book participated in the process that led to new perspectives on cultural minorities in American life. Hall is especially concerned with the condition of cities: perceiving the hazards of both decline in which capital flees the central urban areas, and also of “urban renewal” with its gentrification and new housing designed for appearance and profitability rather than livability–when the latter depends on infracultural variables that have never been consciously assessed.

He also offers indictments of the whole of American mass culture. Even though he avoids value-judgments when comparing cultures, he does repeatedly emphasize how American culture facilitates a sensorily-poor environment. He has some sage warnings (still unheeded half-a-century later, alas!) about the impacts of the automobile and the telephone on socio-spatial perception. Hall cautions his readers that the hyper-urbanization transpiring worldwide is creating dynamics “more lethal than the hydrogen bomb” (165) — a warning which is tempting to dismiss as hyperbole. And yet the combined evidence of both history and ethology is on his side in making this claim.

Considering how outmoded some of the presentation in this book is, I was surprised to see that it had been reprinted in the 1990s. It would be a shame if no one has followed up in this topic so as to obsolete this ground-breaking text. If such further work has been done, I would be very interested to read it.