Medea by Euripides, directed by Anastasia Revi, live music by Daemonia Nymphe, from Theatre Lab Company at the Riverside Studios, London on March 5th through 22nd, 2014 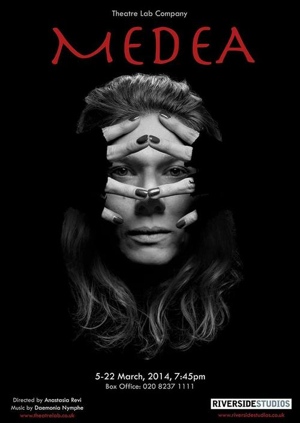 The timeless ancient story of one of the wildest and most passionate women in the history of theatre: Medea. The woman who lives her life on the edge, the lover who poisons her rival, the mother who kills her own children.”

“The longest track we have ever composed (and asked to compose) during a very hot Summer in Crete! Even though it doesn’t sound so sunny…” [via]

Psychostasia with Daemonia Nymphe at Riverside Studios on Mar 23, 2014 at 8pm

Psychostasia: The Performance is presented by Daemonia Nymphe Δαιμονία Νύμφη and Theatre Lab Company, directed by Anastasia Revi, at the Riverside Studios, London on March 23rd, 2014 at 8pm.

“Illusions, reality and myth mingle in this enchanting labyrinth of stories, dreams and emotions …
Zephyrus, the God of the West wakes up whispering.
The girl who wanders in chaos finds herself dancing on the sea waves.
The moon turns the fairies lunatic.
And the twin brothers, Sleep and Death, play with minds and souls in this charming and shimmering universe of music, movement and image.

A unique collaboration between Daemonia Nymphe and Theatre Lab Company where music, visuals and dance performance creates an illusion dreamwork that becomes the journey of psyche … Psyche /ˈsaɪki/ : the totality of the human mind, conscious and unconscious.” [via]