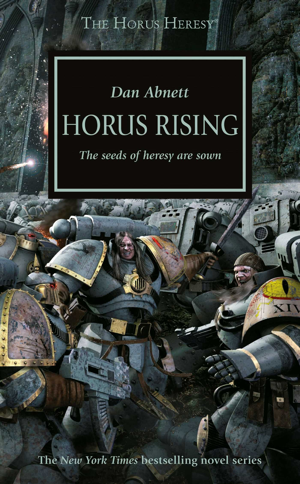 Earlier this year, I had written that I was done with Warhammer 40,000 literature for a while. I had certainly more than satisfied the appetite for “lore” that was first instilled in me by playing Space Hulk: Death Angel – The Card Game. But I recently got my hands on the game Forbidden Stars, a much larger-scale affair of conquering multiple star systems in the WH40K setting. Thus inspired, I returned to the novels, this time picking up with the start of the interminable “Horus Heresy” series. It was much better than I expected it to be, and I read through it quickly.

The saga appears to be the history of the origin of the Chaos Space Marines, covering events centuries prior to the game setting, and this first volume precedes even that. It presents the Warmaster Horus in his glory as Primarch and chief envoy of the Emperor of Mankind, mostly as seen by the straight-arrow Space Marine Captain Garviel Loken, a leader within the Warmaster’s own Luna Wolves legion. The mystical veneration of the Emperor, so well-established in the game setting, takes a nascent, clandestine form in this book. Also of great interest to me was the depiction of an unsanctioned system of Masonic-style lodges within the Space Marine legions.

The book is divided into three parts, each addressing a different world where Horus and the Luna Wolves conduct warfare and/or diplomacy. There is an isolated human civilization that believes itself to be the original Solar System, a planet of hostile arthropod “Megarachnids,” and a human-led, mixed-species “interex” that spans a swath of star systems. I do have the next book of the series—in a box somewhere. I’ll read it when it turns up. [via]