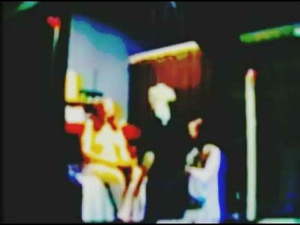 The article is barely worth mentioning, but it’s an interesting example of how newbies perceive things and apparently freak themselves out (or are freaked out by ill-informed friends) around attending such things. Frankly, that kind of self-induced frission is nothing compared to the funky mind games one can play with themself before an initiation (“OMG, what did they put in this WATER they offered while I wait my turn?!?!” or “I hope the GOAT is GENTLE this time!!!”), but this was an example of someone who might have stayed for a much fuller and richer experience of, you know, actually attending the Gnostic Mass ritual if they had been allowed the opportunity to pass the first time they attended, which some local bodies do offer.* However, on the other hand, in spite of the author of the article, I think the amiable and welcoming as well as both funny and serious nature of most actual Thelemites I’ve known comes through a bit as an example for those able to get over themselves long enough to join in.

* The point about being expected to partake is actually one of those issues. The text of Liber XV, the Gnostic Mass, itself says, “Those of the PEOPLE who intend to communicate, and none other should be present, having signified their intention, a whole Cake of Light, and a whole goblet of wine, have been prepared for each one.” And, so … but self-care and self-determination, tho.