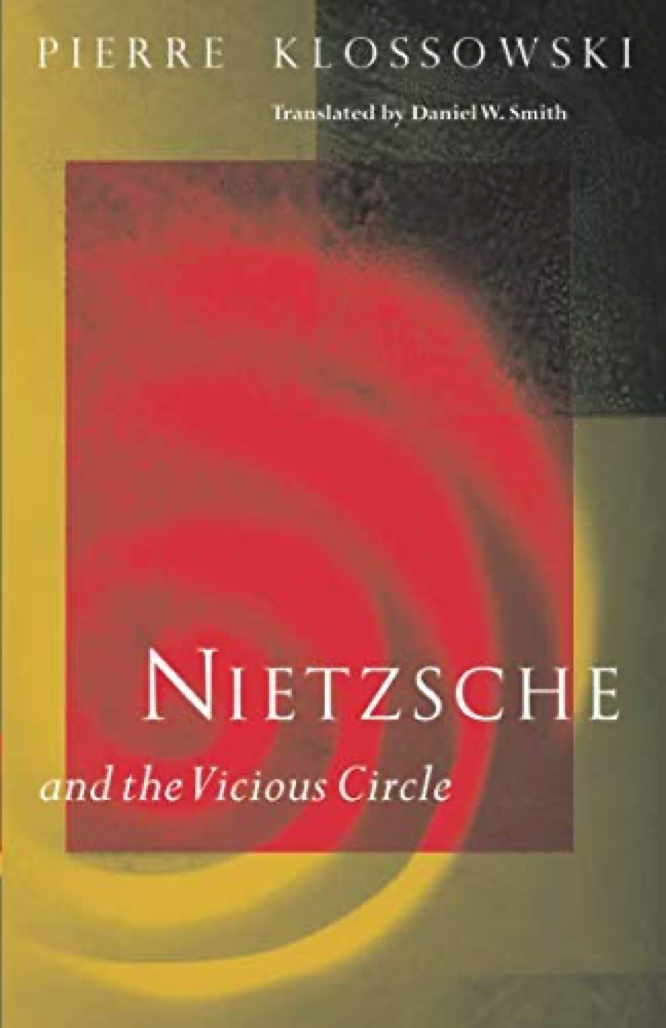 Pierre Klossowski’s magisterial reading brings into relief the seductive character of the ordeals involved with Nietzsche’s sicknesses and anti-sociality. Although Nietzsche felt compelled to communicate the circulus vitiosus Deus and thus to clothe it in concepts, it is not chiefly a doctrine. Like the “Kingdom of God” of Jesus, or the “Knowledge and Conversation of the Holy Guardian Angel” of the Master Therion, the Eternal Return is in fact an experience that overcomes rational identity even as it validates the numinous self. The incoherence of this experience is of a piece with the absurdity of its prophet and his apparent descent into buffoonery and madness.

In discussing such matters as “valetudinary states” (i.e. experiences of illness), the Eternal Return, and the semiotics of the ineffable corporeal impulse, Klossowski makes extensive use of Nietzsche’s private correspondence and manuscript fragments. As he demonstrates, Nietzsche viewed the Eternal Return as a secret knowledge that–in virtue of its very nature–could not be communicated openly, and so these texts from outside of the canonical Nietzsche corpus are indispensable. In the original French edition, these were presented without proper citations, and it was a heroic work of translators Ronald Vouillé and Donald W. Smith (into German and English respectively) to have produced the apparatus which properly identifies their sources in the Sämtliche Werke: Kritische Studienaufgabe and other posthumous editions.

Klossowski, who did not call himself a philosopher, often seems concerned to rescueNietzsche from his 20th-century rehabilitation in the philosophical discipline. Although Klossowski was a student of Georges Bataille and dedicated Nietzsche and the Vicious Circle to Gilles Deleuze, the text is free of explicit references to or arguments with other Nietzsche scholars. At the same time, it deserves to be read in agonistic contact with the interpretations provided by Martin Heidegger, Walter Kaufmann, and others. This book has evidently had a significant influence on later French theorists such as Michel Foucault, Jean-François Lyotard, and Jean Baudrillard.

One unusual merit of Klossowski’s study is the extent to which he takes seriously Nietzsche’s oracular function. More than once, Nietzsche and the Vicious Circle pauses to consider the extent to which the world of the middle 20th century had met, and in some cases surpassed, the social and cultural prognostications offered by Nietzsche, who believed that the product of his contemplation might “break the history of humanity in two.” (100, 230) In exercising his “religious, that is to say god-forming, instinct,” Nietzsche contemplated “God as a maximal state, as an epoch.” (209, 107) The perfection of the individual relative to this epoch is to operate unassuaged of purpose. “Nietzsche’s unavowable project is to act without intention: the impossible morality.” (140)

As blurber Graham Parkes remarks, Klossowski’s book is “profound, but extremely taxing.” To profit from it requires prior familiarity with Nietzsche’s biography and writings. It will not serve as an introduction to Nietzsche’s work, but it remains one of the most penetrating examinations of the anti-system which that work adumbrates.