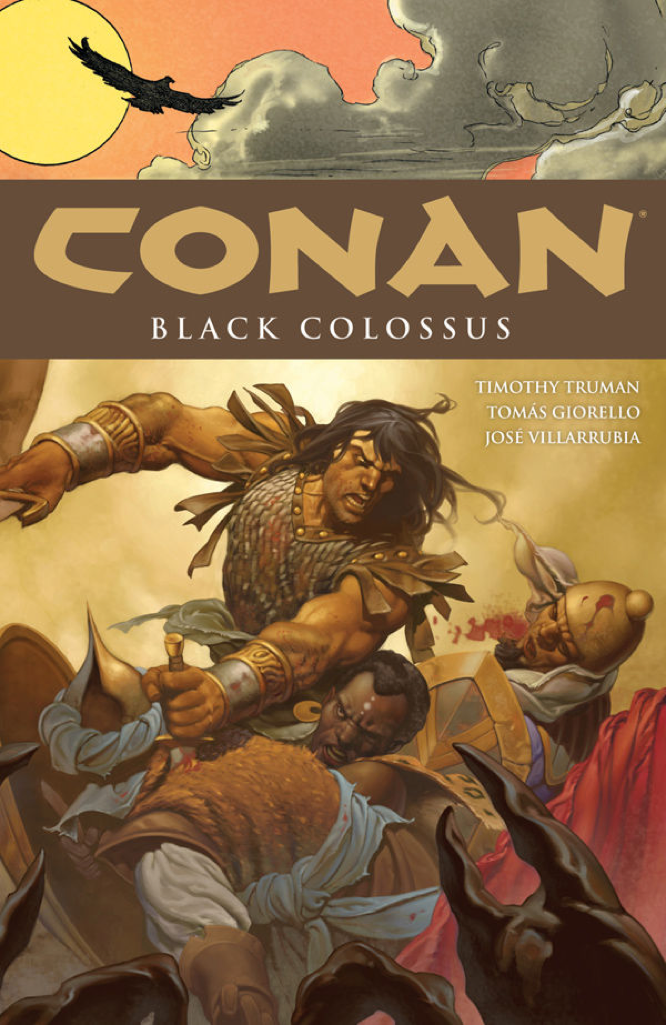 Although this book collects six issues of the continuing Dark Horse Conan comic, it really is a solid graphic novel with its own coherent plot arc and narrative integrity. Tim Truman has done a terrific job of adapting and expanding on the original Robert E. Howard “Black Colossus” short story, in light of the difficulty–which I have mentioned in earlier reviews–presented by the novel form which latter-day Conan writers have adopted. In 1974 the Savage Sword of Conan cover boasted “a novel-length tale,” but provided a mere 35 pages to exhaust Roy Thomas’ Savage Sword of Conan adaptation of the same story: less than a quarter of the length of the Dark Horse version.

The illustration in this Black Colossus is really terrific. Joseph Michael Linsner, who is no slouch, provides striking interstitial art (first used in the original comics covers, I think), but I honestly prefer the work on the continuous panels by Giorello and Villarubia. As much as I liked the Buscema art of the 1970s, the 21st-century artists are putting it to shame.

Truman’s writing did include a tiny amount of grammatical failure in attempting mannered archaic speech in the way that made Michael Avon Oeming’s Red Sonja comics excruciating to read. But most of the writing was as eloquent as it needed to be, and he used a lot of Howard’s original prose.

“Black Colossus” is in many ways a quintessential Conan story. It gives the whole of Conan’s rise from rootless rogue, through disciplined warrior and military leader, to (temporary) royal station, all within a single adventure. He defeats an evil prophet-sorcerer and rescues a princess. Commendably, the sorcerer-sacrificing-the-girl-on-the-altar scene is motivated by more than mere custom or following the grimoire!

Overall, this book combines many of the best features that have been accreted to the Conan concept from its REH origins on. It has the sort of adventure pacing that we think of as “cinematic,” but really originates with Edgar Rice Burroughs and the pulp writers. The characters are recognizable from their prior iterations, and the Hyborian settings are fantastic and visually splendid. The violence and sex are unapologetic. To call this the eighth volume of a series is a little misleading. If this were the only Conan book ever, it would be a good read on its own, and it could communicate the whole notion of Conan and his world quite worthily.