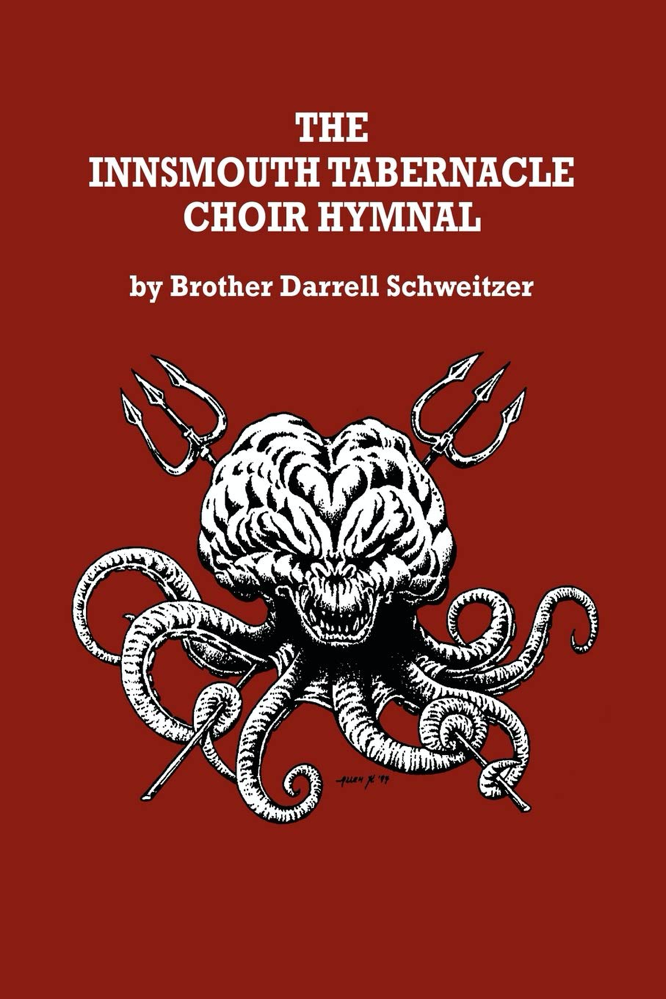 Brother Schweitzer here offers the only contemporary published tome of Elder Filking of which I am aware. It is a veritable thingsend to someone like me, who, though steeped in the lore and unmentionable fluids of Those Who Shall Return, has never had the pious pleasure of attending one of the blasphemous conventicles organized by the Reverend Robert Price under the aegis of the Cthulhu Prayer Breakfast.

The quality of the lyrics is pretty high. My particular favorite is the “Hymn to Yog-Sothoth” to the tune Nun danket. (19) Alas, there are only ten hymns included, making it an inadequate resource for a regular congregation or choir. The madness undergirding our tenuous reality demands a more wide-ranging liturgical inventory. Given that all of the songs in this volume are of Brother Schweitzer’s own invention, however, it is a reasonable achievement. A more robust volume would draw on the exudations of a larger corps of scribes.

A notable error arises in connection with the hymn “An Eldritch Horror Is Our God.” (15) While it does quite effectively expose the cosmic horror lying at the back of the German reformer’s famous song, it is missing a line at the conclusion of each full stanza. (The text gives two stanzas printed as four.) I propose a one-line refrain to conclude each: “Iä! Iä! Cthulhu fhtagn!” Alternatively, the title itself “An Eldritch Horror Is Our God” scans adequately. 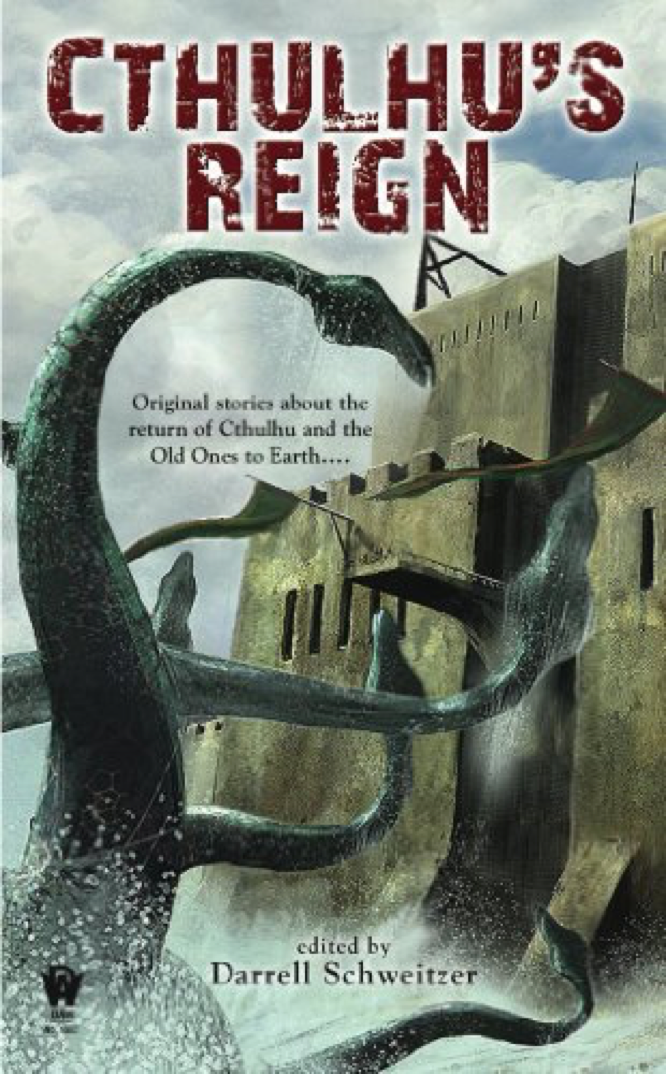 As one among innumerable collections of Lovecraftian short fiction, a couple of features distinguish the recent Cthulhu’s Reign. First, all of the stories are new, evidently commissioned for this volume, with none garnered from zines and prior anthologies. Second, the unusual theme that they share is that of the Cthulhoid eschaton accomplished: the stars have been right, and humanity’s domination of Earth is over and done with.

There are a total of fifteen stories, each by a different author. Most of them don’t venture too far beyond the return of our alien landlords; only in a couple instances does the narrative comprehend events that follow the end of our history by more than a single generation of dispossessed humans. In at least a few cases, the packaging seems to work against the content–that is to say, the story might have had more dramatic force if the reader hadn’t come to it already informed that the setting was “an Earth ruled by Cthulhu, or his minions (or even his enemies)” (per Schweitzer’s introduction, 6). All of them show a distinct level of creativity beyond the ordinary Lovecraft pastiche. After all, while the wholesale return of the Old Ones is an invariable element of the mythos, HPL only actualized it in narrative once, in the brief, dream-inspired “Nyarlathotep” (1920).

The stories that do go further into the future than the immediate aftermath of the Old Ones’ return are certainly the most exotic. I liked the surreal solipsism of Laird Barron’s “Vastation,” and Brian Stableford offers piquant food for thought (or is it thought for food?) in “The Holocaust of Ecstasy.” In other standouts among the generally high-quality selections, I appreciated the well-informed Central Texas setting of “Sanctuary,” as well as its wry blasphemous features that were surely imperative in a story written by Don Webb and dedicated to Robert Price. The most overtly theological entry is “The New Pauline Corpus” by Matt Cardin, which demonstrates even better than Webb’s story how adaptable the human religious attitude really is. More pedestrian Cthulhu cultists feature in “Ghost Dancing” by the volume’s editor, and in “The Seals of New R’lyeh” by Gregory Frost. The last couple of stories, “Nothing Personal” by Richard A. Lupoff and “Remnants” by Fred Chappell, both expand the context to an interplanetary scale, and tip the genre strongly toward science fiction.

The experience of reading these tales over the course of a week or so brought into relief for me the background sense of recent cataclysm that seems to be part of early 21st-century life, whether it’s the 9-11-2001 events, hurricane Katrina, the Deepwater Horizon catastrophe, or the flood of Pakistan, it seems like the world has always just gone to hell. At one point, someone mentioned Houston in conversation, and I found myself mentally groping for the horrible event that had just befallen that city, before realizing with some relief that it was merely a passage from Cthulhu’s Reign that I had mentally misfiled too closely to “fact.”