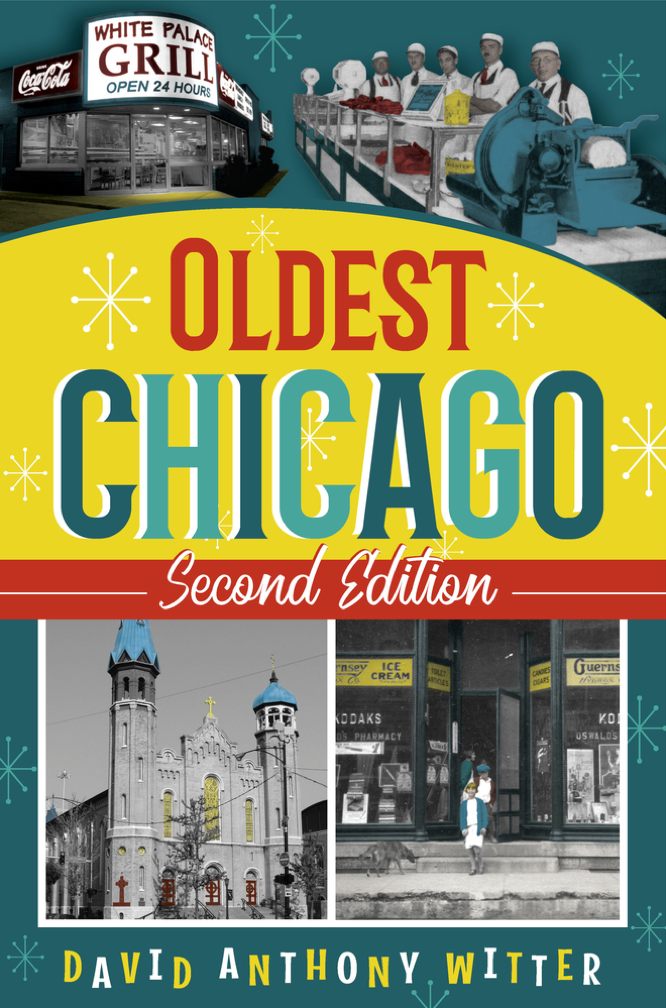 Oldest Chicago is a guidebook to the most venerable sites and businesses in the Chicago area. Each location is accompanied by a black-and-white photo, usually taken by the author. The main text for each short chapter gives the history of the venue in question, usually grounded in the author Witter’s interviews with proprietors or experts, whom he quotes liberally. A significant exception is the rich chapter on Chicago’s “Oldest Indoor, Olympic-Sized Swimming Pool (Now Junior Olympic),” in which Witter discusses his own experiences working at the pool of the Medinah Athletic Club in the 1980s. Every chapter concludes with a boxed inset directing attention to other attractions that are nearby or conceptually related to the main subject, even if the others lack Oldest credentials. This device permits Witter to introduce more information about Chicago neighborhoods, and provides the reader with better justification to make visits to the sites that are most intriguing, with the opportunity of a fuller trip in the offing.

The book is divided into three sections. The first is “The 1800s Club” with survivals from that period. The second is misnamed “Food, Fun, and Entertainment,” even though it includes chapters like the “Oldest African-American Newspaper” and “Oldest Vertical Lift Bridge,” that evidently don’t fall in those categories. What the second section really is, is simply “20th-century Classics,” continuing past the year 1900 with the same chronological sequence of chapters established in the first section. The final section has its own separate chronology, and treats notable old places outside of Chicago proper, in “The Suburbs and Exurbs.”

Although I grew up in the Chicago suburbs, have lived in the city, and reside in the area today, there were plenty of interesting facts that were new to me in Witter’s book. I was shocked to discover the Chicago whereabouts of “the largest mass grave in the northern hemisphere.” (21) Learning where I could spot a dirigible port in the downtown skyline was a piece of delicious trivia. (164) The identity of Chicago’s earliest recorded Chinese resident as “Opium Dong” certainly gave me a laugh. (147)

Witter is a lifelong Chicagoan, whose pride and sense of place is clear in his lucid, journalistic writing. He commits some howlers when he resorts to historical generalization, though, of which the worst by far is to claim, “America was settled largely by Puritans, whose beliefs in temperance still influence much of the politics of the nation’s heartland today.” (Here he also neglects specific Chicago history. If there were a sectarian connection for the origins of the temperance movement, it would probably be the Methodism of key Women’s Christian Temperance Union president Frances Willard, who was a Dean of Women for Northwestern University in Evanston, immediately north of Chicago. Evanston was a hub of the temperance and prohibition movements, and remained an entirely “dry” community until the 1970s.)

A major failing of the book is the omission of maps! Both historical maps to show the changing contours of the city around the sites described, and contemporary maps to help orient would-be visitors today, are unfulfilled desiderata for this volume. They might also have helped orient the author, who in at least two instances writes “west” where “east” would be accurate. (96, 131) Still, Oldest Chicago is entertaining and educational, and should be useful for both prospective visitors and longtime residents.