Hermetic Library Fellow T Polyphilus reviews When You Are Engulfed in Flames by David Sedaris. 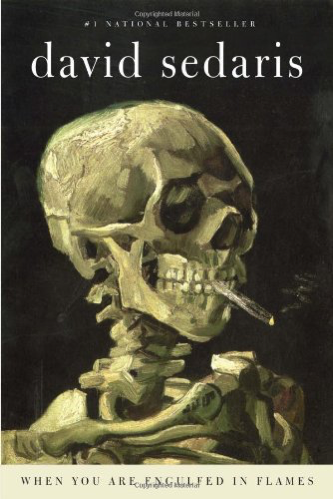 Having had, like many, my initial exposure to David Sedaris’s wit on public radio (in the initial 1992 airing of “The Santaland Diaries,” in fact) it is nearly impossible for me to read his essays without hearing his voice. I’m not sure if that makes them funnier or not–it’s just a condition of my reading. There are plenty of laugh-out-loud moments in this collection, even if the general tone is fairly dark.

My Other Reader says she wouldn’t bother to re-read any of these essays, because the value of their effect is rooted in shock and surprise. I don’t think I agree. Partly, I go for the extreme contrast between the feeling shown in his insightful reflection on human limitations, and his callous exploitation of those limitations for yucks in practically the same paragraph. For sheer entertainment, I like the deadpan frankness, whether it’s honest or blankfaced lying.

It’s certainly difficult to know what a reader can credit as fact. The sustained use of the subjunctive mood at the end of an essay on the development of the author’s sexual identity leaves an attentive reader inferring a bleak reality. And on the very next page, he launches into the hyperbolically fictitious account of his studies at Princeton during the Stone Age. (71-73) If my dad had struck me on the head with a big spoon at the dinner table because I had laughed at my grandmother’s flatulence, I’d like to think that I or anyone else would quit laughing long before the spoon drew blood. (227)

At any rate, all of these essays are eminently readable, and the book is full of characters too odd to be entirely fictitious, not least Sedaris himself. [via]