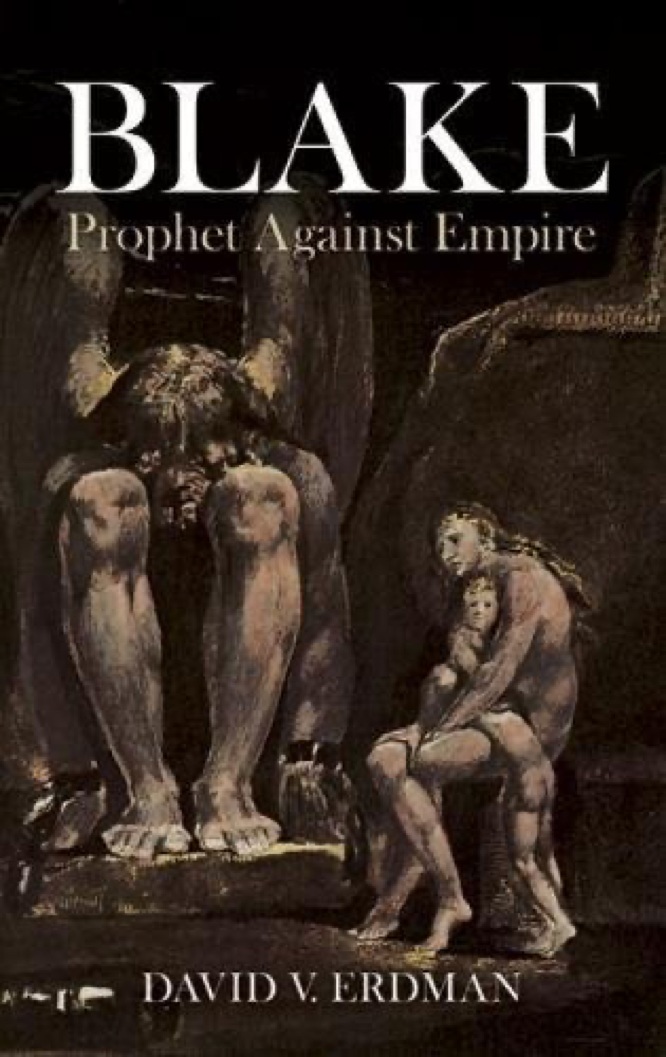 Psychologizing and spiritualizing critics of William Blake’s prophecies have generally taken their giants and fairies as subsisting outside of the continuum of political and social history. At best, they have (like Northrop Frye) allowed a cultural context and a distinctive position in intellectual history for these sui generis and highly opaque texts. Erdman’s Prophet Against Empire is an impressive and effective effort to provide the immediate and evolving political context of Blake’s work as “a poet’s interpretation of the history of his own times.” It was first published in 1954, and the copy I read is the significantly revised and expanded second edition of 1969.

Many sections of Prophet Against Empire were somewhat illuminating to me for their picture of English history generally. Erdman observes some popular support in England for the American Revolution, with a significant presence of republican and anti-imperialist sentiment among the urban working classes. Even passing into Blake’s early 19th century, the militarism of the English government, the neglect of the laboring classes, and the suppression of dissent were themes that seemed up to the minute for 21st-century Imperial US-Americans.

Erdman treats Blake’s entire lifespan, visiting in its course the authorship of all the prophecies, and I read these in tandem with Erdman’s book. While it is certainly true that these texts do have spiritual and psychological dimensions beyond their political enthusiasms, I think it would be a loss to overlook, and a crime to ignore, the palpable political statements they contain.

The full significance of Blake’s “mythological” figures may shift and revolve through the course of the different prophecies, but Erdman persuaded me of such passing identities as Rintrah for William Pitt (202 etc.), Theotormon for John Stedman (230-33), Tharmas for Thomas Paine (298-301), Palamabron for Parliament (424-26), and so forth. The analysis here does not reduce the prophecies tout court to political allegories, but it lays bare the political roots and motives of different figures and tropes as part of the artistic whole, and no incidental part at that.

Decades later, when the eminent historian E.P. Thompson came to write his study of antinomian religion in Blake, he praised Erdman’s prior work to the extent that “On the directly political themes I have (no doubt to the surprise of some readers) little to add” (Witness Against the Beast, xiii). I doubt that Blake: Prophet Against Empire can be much appreciated without a firsthand experience of Blake’s prophecies. But anyone who has that experience can benefit tremendously from Erdmans’ research and conclusions.