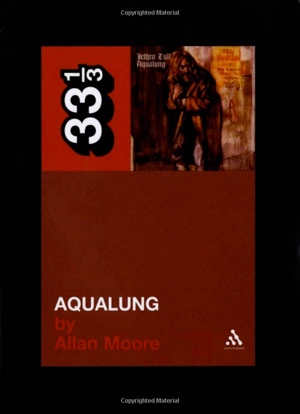 Author Allan Moore (just one L, not the celebrated comics writer) heads up a university department of music and sound recording, and it shows in this study of the Jethro Tull album Aqualung. Writing for a popular audience, Moore takes some care not to get too musically arcane, and he explains technical terms as he introduces them. Even so, there are a few passages in the book where his discussion of chord sequences made my eyes glaze over a bit, and I’m enough of a musician to have played many of those chords myself out of a Jethro Tull sheet music book I have.

One aspect of the musical discussion that I found very worthwhile was consideration of the “sound box” — i.e. the virtual acoustic environment engineered through stereo sound — in tandem with the instrumentation and other recording effects. I’ve read one other volume in this “33 1/3” series about the masterpieces of audio vinyl, and this element didn’t come up in that case.

Besides the musical features of Aqualung, a chief part of its incontrovertible lyrical and semiotic substance is a struggle with/over religion. In this case, the lack of sophistication in Moore’s treatment might be due to either his trepidation about confronting readers with difficult religious ideas, or his own anemic grasp of them. Anyhow, while he makes a few interesting points on these lines — such as his consideration of the charcters in “Locomotive Breath,” — he ultimately doesn’t do justice to Ian Anderson’s perversely pious and profound confrontation with conventional Christianity.

Still, the whole book is a quick read, and if its only effect had been to motivate me to reacquaint myself with a terrific album of music, it would have been well worth my time. [via]