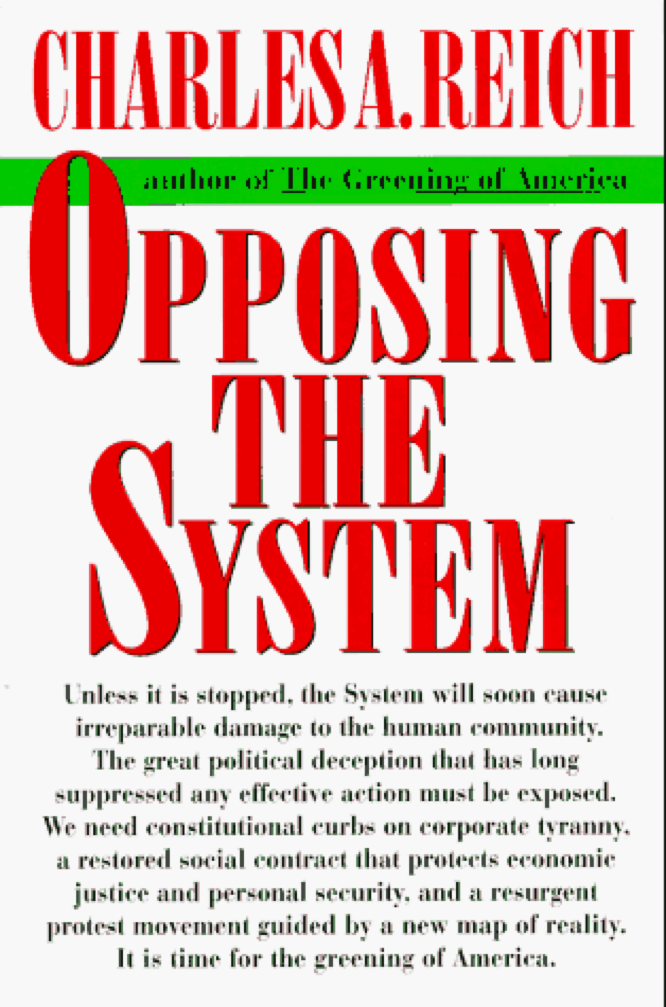 Yale law professor Charles A. Reich’s best-known book is The Greening of America (1970), in which he promoted what he saw as the goals of the youth counterculture of that time. Opposing the System was written in the mid-1990s, shortly after the so-called “Republican Revolution” in US electoral politics and reflects on Reich’s concerns at that later period.

The book is a manifesto for social renewal in the US. One of its most valuable observations is that large commercial corporate entities are in fact governments, simply authoritarian ones unaccountable to the public–or even to their own shareholders in most cases. The quasi-libertarian rhetoric so common in establishment US politics and punditry reflects the functioning of a System in which private and public governmental functions are interlocked (military-industrial complex, “mainstream” media, carceral industry, etc.) to escape responsibilities and externalize/deny costs.

Every troubling symptom in Reich’s diagnosis has gotten significantly worse in the last quarter century. He doesn’t even mention climate change. The System he outlines has gotten more entrenched.

“We cannot expect to control the System unless we can place ourselves at an intellectual level above the System, where we can see the infinite other possibilities of life as well” (199). Reich makes this observation in the context of the need to restore citizenship. But he leaves unspecified how people are supposed to rise above the System. Formal education has been degraded into training, especially at the primary and secondary levels. In recent years especially, public education is under a full-scale assault, both figurative in the sense of ideologies imposed by the System on schools and teachers (including budgetary austerity), and literal in the sense of massacres and the terrorizing “drills” they inspire.

Reich’s occasional appeal to “American ideals” supposedly held by the Constitutional founders of the US rings as a little naïve, but it is understandable in the context of public persuasion. More importantly, he points out the real value and context of the aborted New Deal, and the recognition in the mid-twentieth century of the threat that has come to manifest in the System.

The book is no silver bullet, but it is something of a tonic for those of us who are caught in the cognitive dissonance that results from the massively propagandized world of what Reich calls the “Existing Map” of reality.