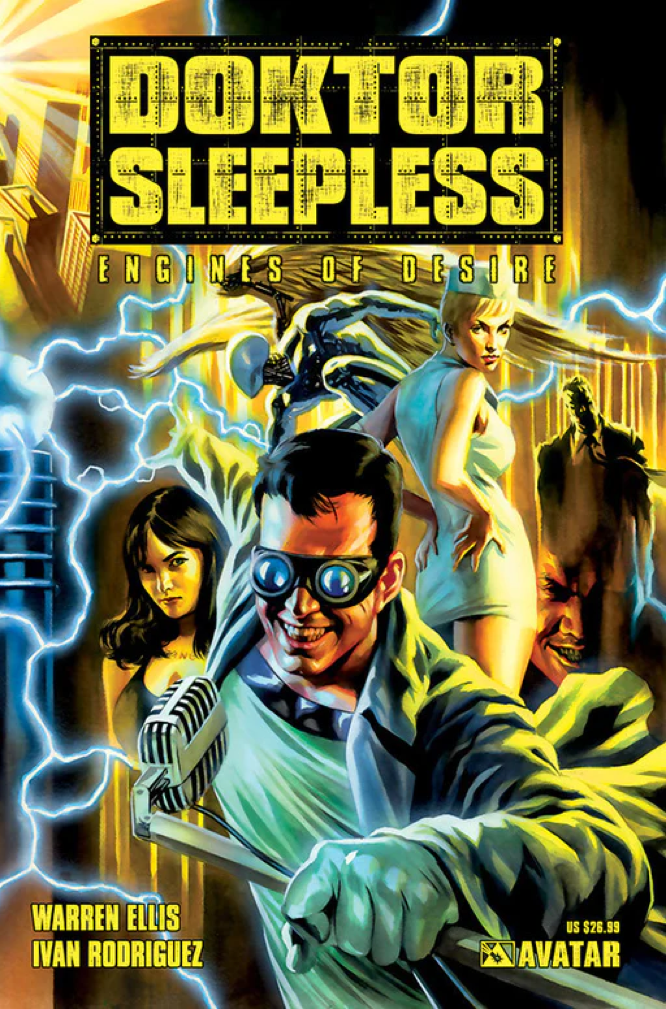 This volume contains the first eight issues of Doktor Sleepless, plus some endmatter consisting of painted cover art from individual issues, and print snapshots of the wiki at Doktorsleepless.com. Having started in this vein, I plan to follow this title in trade paperback format, though goodness knows there’s enough meat to each issue to make it worth reading in individual comics.

Although there is no resolution to the steadily-intensifying plot in this collection, there is a climactic epiphany in the eighth issue. Doktor Sleepless invites comparison with Alan Moore’s V for Vendetta, although the target is clearly today’s USA, rather than the Thatcherite UK of Moore’s dystopian fantasy. As in V, the central character is a self-caricaturing enigma who is engineering the collapse of the existing social order. He’s got a girl sidekick, and seems as much villain as hero. There’s even business with mass-distribution of masks — Ellis doubles down on that trope, in fact.

Creepy, violent, and believable, this comic picks up and continues the outrage over injustice that Ellis exhibited in Transmetropolitan, while stripping the (always somewhat ornamental) science-fictional elements down to a bare minimum. A kindred cyberpunk comic would be Testament, but where Rushkoff uses the Bible to frame his tale of techno-sociological crisis, Ellis substitutes the Necronomicon (or something worse).

Anyhow, it certainly won’t be everyone’s cup of tea, but I’ll be impatient for the next collection.