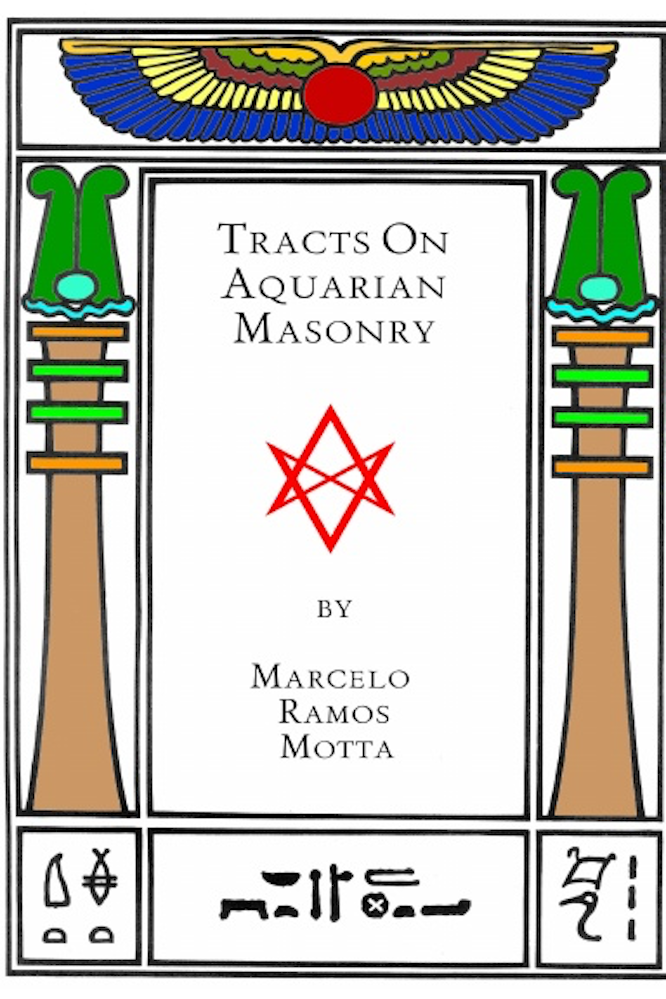 The phrase “Aquarian Masonry” does not appear in the papers collected here, two of which are far longer than current usage of the term “tract” might suggest. My inference is that editor Dominick Bruno Jr. used “Aquarian Masonry” in the book’s title as a circumlocution for Society Ordo Templi Orientis, i.e. author Marcelo Motta’s idiosyncratic and unauthorized reconstruction of Aleister Crowley’s O.T.O. The three principal documents under this cover were all preliminary instructional materials for S.O.T.O., as the fourth–its 1980 manifesto–makes explicit. That manifesto also demonstrates how far Motta’s reworking of the O.T.O. system deviated from its plan in Crowley’s “Blue Equinox” of 1918 (a document conspicuously absent from the bibliography appended to this book) and his later papers and rituals.

The body of Tracts on Aquarian Masonry begins with “Letter to a Brazilian Mason,” dated 1963, but evidently twice revised and expanded, with the S.O.T.O. version of 1977 being the basis of the current text. The epistolary form of the document represents an unfulfilled plea to someone with influence in Brazilian Freemasonry, to avoid a rapprochement between that organization and the Roman Catholic Church. Accordingly, much of the letter is taken up with indictments of Roman Catholicism and an exposure of its origins. On the whole, I found myself sympathetic to its argument. While some its views on Atlantean “history” seemed a bit fanciful, its mythicist approach to Christianity is more coherent and creditable than some of the sources that it cites, and it is consistent with Crowley’s positions and the Thelemic reception of “true Christianity.” Motta does err in implying that Protestantism in any way ameliorates the ills of exoteric Christian tradition (42). The relative cultural and technological superiority of Protestant countries does not result from their Protestantism; the causation works in the other direction. Protestantism is a necessary adaptation to social advances so that the Great Sorcery can continue to afflict countries trying to escape its grasp.

Motta’s claim that the Masonic 33° initiate is the potential equivalent of a Minor Adept (5○=6□) in the A∴A∴ system (18) was one I had not seen before, but it aligns with Crowley’s remark that the fully realized O.T.O. IX° is comparable to “a very fine and balanced 6○=5□” (i.e. Major Adept). I was a little surprised at Motta’s carelessness in referencing the exchange from Crowley v Constable and Co. in which he explained his occult identity as “Little Sunshine,” but without mentioning the number 666 that makes the explanation intelligible (27).

The second Motta paper collected here is “Thelemic Political Morality.” It is a rather short essay with provocative reflections on law and government. Reading it in the US of 2021, it seems particularly timely because of this emphasized concern: “We should therefore repeal, with the greatest indignation, any attempt at presenting the history of our nation ‘expurgated’ of crimes, outrages, and false ambitions: we must demand that our children be allowed to learn the errors of their ancestors, and the motives behind these errors” (53-4).

The third of these papers is “On the Political Purposes,” formerly titled “Of the Political Aims of the O.T.O.” US readers may find some passages in this essay a little opaque, owing to Motta’s orientation to his own Brazilian context. For example, he refers repeatedly to the “festive left” (i.e. esquerda festiva). Still, that particular political coloration has a close counterpart in the “liberal” protest culture of the 21st-century US. I find Motta’s ultimate conclusions in this paper to be somewhat defective; he reckons with neither the cascading effects of industrialization on the physical environment nor the neoliberal exaltation of the hero CEO in the invidious ascent of the cartels. The essay is still an instructive example of the application of Thelemic principles to organizational and social thought. Of course, it in no way supplies authentic details to the political positions of today’s O.T.O. adepts.

Bruno claims to have improved the typography of the original documents in this print-on-demand edition, and since I have not seen the originals from which he was working, I’m willing to credit that it may be so. Still, the layout and production of this book are amateurish. The contents are however of great and continuing value to Thelemites and historians of Thelema.