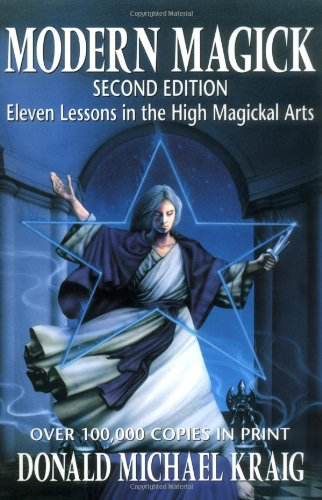 Kraig’s background in the Golden Dawn tradition is readily apparent in this excellent beginner’s text on ceremonial magick. Kraig takes the novice through several basic rituals, step-by-step, and explains the moves, tools and words in very clear English. Each chapter ends with review questions and a bibliography of suggested reading.

Although I disagree with some of the author’s views, particularly his oversimplification of “white” and “black” magick, overall I have found this to be a very useful addition to my library and feel that Kraig offers valuable insights for beginner and seasoned practitioner alike.

If you’ve discovered much of anything about sex magick during research or exploration, expect to see it repeated here in spades. Basic information is repeated ad nauseum, with little explanation other than “how to” in multiple combinations of partners. At the same time, Modern Sex Magick successfully strips problems with “morality” in sex magick out of the book, but adds a new level of disgusting white-light fluff about “harm none” and the like into the commentary. Despite attempts to remove the stigmas attached to sex and sex magick, Kraig fills this void with sermonizing on the “moral” nature of magick. By liberating one area, he foists imposed moral judgements on another. The book is further flawed by the fact that it fails to cite references, particularly in notable attempts to claim sex magick as part of traditional Judaism and as official Golden Dawn practice. Ideas are put forth as authoritative statements, but rarely backed up by the references necessary to check the sources of them. This doesn’t surprise me given it’s a Llewellyn book, though.

Beyond these problems, it also must be noted that it appears that Modern Sex Magick has a severe bias against several individuals and magickal orders that come out full-force in the book. Kraig cites Crowley’s “invocation of a demon into himself” without references (I assume he’s referring to the L. 418 practices with Neuberg), and uses this as an example of how people believe that this marked the beginning of Crowley’s “decline.” This idea is repeated throughout the book, with nary a positive comment on the man or his works. Similarly, the author’s treatment of A.O. Spare is brutal and attacks the man for his beliefs, and of all things, his appearance. I don’t understand how the book is enhanced by the frequent character assassinations, or how the author expects to be taken seriously given the lack of references and obvious slams.

This bias pops out full-force when referring to initiatory orders and individuals who “keep secrets”, namely the O.T.O. Despite requiring the female authors who assisted in one chapter to “not reveal secrets of any group”, Kraig in Modern Sex Magick gleefully makes time to hand out what he alleges are “secrets” of the OTO and other organizations, but somehow given the level of dismal scholarship elsewhere, they probably are less than accurate.

What is probably most disquieting about Kraig’s book is the fact that he makes allegations about documents that are untrue if the reader has any familiarity with them. In an attempt to dodge copyright and ownership issues, Kraig recants numerous tales surrounding the infamous Ordo Templi Orientis IX° document, “Emblems and Modes of Use”, but fails utterly to present accurately the information contained within them. Relying on a decade old bootleg description from a Thelemic magazine, Kraig’s accounts of “Emblems and Modes” focuses more on alleged penis-sucking of vaginal fluids than on the secrets which he alleges to possess. Nowhere does he mention the Christian components so important to proper understanding of the IX°, or the focus on the ritual phallic component of the VII°. In other words, he misses the boat entirely and tells the reader nothing they can’t glean from a cursory reading of alt.magick. If Kraig had read the documents with a more critical emphasis, he might have contributed something other than to the legends and mystery surrounding the upper degrees of the OTO.

All in all, a fundamental waste of cash and time spent reading; this reviewer strongly suggests acquiring Francis King’s “Secret Rituals of the OTO” instead.

“The history of mankind is filled with examples of hexes, curses, evil eyes and magickal or psychic attacks. Although many perceived spiritual assaults are unintended, imagined or even self-induced, one of the consequences of the growth of modern occultism has been the increased potential of planned, magickal attacks. In this online workshop-webinar, Donald Michael Kraig, author of Modern Magick, shares practical techniques to prevent, detect, and rapidly overcome magickal attacks of any type. Invaluable information for individuals and groups.”

“When people first learn to work with Tarot cards they usually do so in order to do fortune telling, give readings, or do divination. As they become more advanced, they may use them as keys to Kabalistic Pathworking.

However, there is much more which can be done with Tarot cards, including using them to make positive changes in your life: magick.

In this online training event you will learn the nature of ritual and magick plus several of those magickal techniques, including:

Knowledge of the Tarot is not a prerequisite for this webinar. All you’ll need is your favorite standard Tarot deck and an open mind. This is perfect for Tarot beginners. It will also give people with some Tarot experience new approaches. For professional Tarot readers it will show how you can share magickal techniques with your clients and make your readings more memorable.”