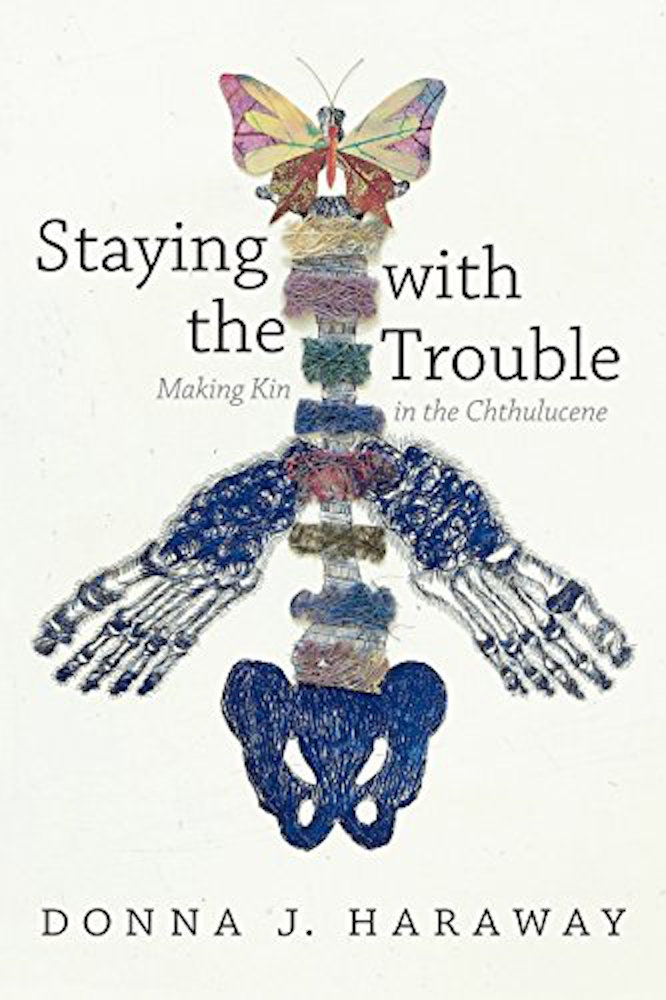 Donna Haraway makes a peculiar choice in coining “Chthulucene” for use in this book. The difference in spelling from H.P. Lovecraft’s notorious dreaming god is deliberate, and she insists that the etymology is from khthon-; but then why not “Chthonocene?” The fact is that she is deliberately evoking Cthulhu, who “shall soon rule where man rules now,” as the Necronomicon admonishes. But her sympathies, unlike those of (the conscious) Lovecraft are not with the “rulers” coded out as Anthropos or Capital or Plantation Owner, or any future value of that function. Her principal slogan for advancing a Chthulucene agenda is “Make kin, not babies,” and she proposes a “tentacular” program of what an Anthropocentric thinker might regard as species treason–not to mention its profound antagonism to Capital.

Haraway’s program of “staying with the trouble” is an imagining of futures that resists utopianism and dismal forecasting. It reminds me more than a little of the anti-capitalist bolo’bolo (by P.M., 1983–whatever happened to my paperback copy?), which was much more sanguine. The chief difference in gravity probably stems from Haraway’s attention to the damage already done to human and non-human biomes. The final chapter of the book is an SF narrative implementing these visions over the period 2025-2425. Throughout the various essays, Haraway construes SF multivalently as “speculative feminism,” “string figures,” “speculative fabulation,” “science fantasy,” and the more customary “science fiction,” and asserts it as part of her resources and method. Previous SF works that receive her special attention include Ursula Le Guin’s Always Coming Home (and others), Orson Scott Card’s Speaker for the Dead, and Hayao Miyazaki’s Nausicaä of the Valley of the Wind.

The species that participate in her Cthulhucene imaginings notably include pigeons, squid, orchids, coral, horses, and butterflies. And SF reflections even recruit the Ood from Doctor Who (the subverted Cthulhu again). Some of these are models to overcome the paradigm of organisms, in favor of holobionts. Others illustrate extant and/or possible relationships among “critters” (Haraway’s preferred term, embracing and exceeding all biotic kingdoms) including humans.

Staying with the Trouble is a chewy read, full of accounts of activist art and the results of late-breaking scientific inquiry (not capital-S “Science” Haraway hastens to add). The body text is about half of the total book, and many of the sixty pages of small-type end notes are worth investigating for their further discussion of sources and inspiration. There are black-and-white illustrations throughout. I made slow progress through it, but it was worth my effort, and although I read a borrowed copy, I would be willing to make space for it on my own shelves.