The Book of Thel

The William Blake Archive has recently announced the availability on their website of William Blake’s The Book of Thel. 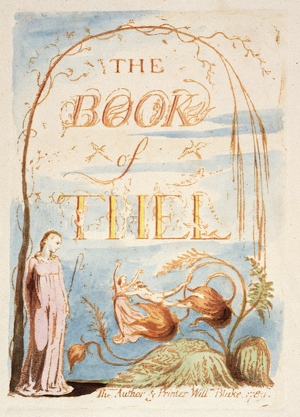 “The William Blake Archive is pleased to announce the publication of electronic editions of The Book of Thel copies B and I, in the Mellon Collection, Yale Center for British Art, and Bodleian Library, Oxford University, respectively. The Book of Thel is dated 1789 by Blake on the title page, but the first plate (Thel’s Motto) and the last (her descent into the netherworld) appear to have been completed and first printed in 1790, while Blake was working on The Marriage of Heaven and Hell.” [via]

“The Book of Thel is Blake’s first illuminated book written in lines of fourteen syllables, a measure used in most of his subsequent books. Thel, a virgin shepherdess burdened by her sense of mortality, seeks meaning for her life by talking with several creatures—a lily, cloud, worm, and clod of clay. These speaking symbols of life’s transience are satisfied with their lot because all believe themselves to be part of natural cycles related through self-sacrifice to a higher purpose. On the final plate, Thel comes to her grave and hears her own unanswered questions redolent with fears of both death and sexuality. This voice, and Thel’s flight from it, indicate either her failure to accept the harsh facts of life or the failure of her interlocutors’ philosophy to satisfy the human desire for transcendental truths.” [via]